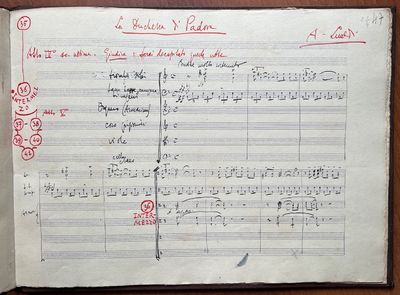 Title slightly foxed; occasional minor tears and creases. Productions of Oscar Wilde's play The Duchess of Padua (1883) are rare, and Lualdi's setting appears to be unknown; the present work is not included in any of the available lists of Lualdi's works and there is no evidence that it was ever performed. Not in Steiger or the Enciclopedia dello Spettacolo... Indice Repertorio.

"Italian composer, conductor and writer on music Adriano Lualdi studied music in Rome and then in Venice with Wolf-Ferrari... In the 1920s he also became active as a music critic: among his numerous writings, Viaggio musicale in Italia is particularly valuable for the light it throws on the Italian musical world of the time. An ardent fascist, Lualdi was 'elected' to parliament in 1929 as representative of the Sindacato Nazionale dei Musicisti. He was an organizer of the first few Venice Festivals (1930-34) and director of the conservatories of Naples (1936-44) and Florence (1947-56). Lualdi's association with fascism, which conditioned his teaching and organizing activities as well as his polemics, led to his being overrated in the 1930s, but in due course aroused such antagonism that his reputation may have suffered unfairly." John C.G. Waterhouse in Grove Music Online. (Inventory #: 38242)
$2,200.00 add to cart or Buy Direct from
J. & J. Lubrano Music Antiquarians
Share this item