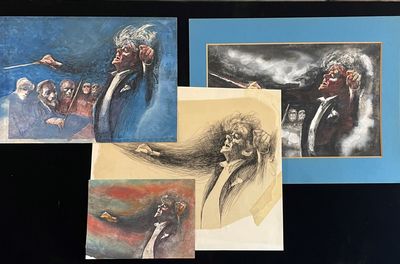 No Binding
by Irv Docktor (illustrator). (Bernstein, Leonard)
No Binding. Near Fine. Four studies of Leonard Bernstein conducting Beethoven by prolific commercial artist Paul Docktor, each signed by the artist and one signed by Bernstein, too. 1) Sketch in black ink on ecru scrap paper. Measures approx. 12x8" 2) Small gauche or pastel and black ink, approx 7x5'. 3) Gauche and blank, approx 12x8", matted. 4) The best, approx 12x8.5", gauche and black ink, blue background, where the sweep of Docktor's sharp, closely drawn lines erupts in Bernstein's siugnature heavy head of hair in rapture, arm extended with baton and face in transported ecstasy. Signed in the lower left in blue felt tip by Bernstein. Irv Docktor (1918 - 2008) was an American illustrator and educator best known for his work as a book and magazine illustrator in the 1950s and 1960s. His versatile work appeared in hundreds of books, best known for hardcover dustjackets like Patricia Highsmith's "Strangers on a Train" and five first editions of Robert Heinlein science fiction novels including "The Moon is a Harsh Mistress". He also illustrated cover designs for Playbill, like his original art for the program for Robert Anderson's landmark drama "Tea and Sympathy". Docktor and his family lived in Fort Lee, NJ, where in 1957, he found a home in the woods, with an inspiring view of the Hudson River and NY skyline that he often sketched. His family frequently attended New York City museums and theatre, the Metropolitan Opera, the Philharmonic, the American Ballet Theatre, and the New York City Ballet. During performances, Docktor sketched what he was seeing in the Playbill. Among his favorite orchestral conductors and composers was Bernstein, the subject of the four studies offered here. . (Provenance: Docktor's heirs). (Inventory #: 012903)
$2,250.00 add to cart or Buy Direct from
Johnnycake Books
Share this item