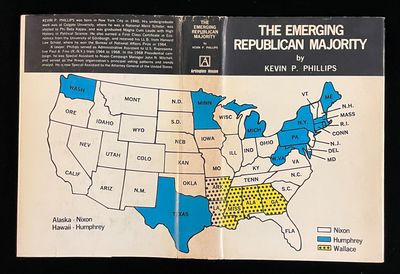 by Phillips, Kevin P.
New Rochelle, NY: Arlington House, 1969. 1st Edition. Hardcover. Near Fine/Very Good+. First book by political author Phillips, and watershed in its impact, lending intellectual rigor to Nixon's "Southern Strategy", which transmuted by the GOP in the five decades since has begot variously the Tea Party, Christian-based politics, the Freedom Caucus and, ultimately, Trump's MAGA. An apparently unread copy, in better than very good, unclipped dustjacket, with the slightest toning of the spine, and light wear at its head. Phillips dedicated the book to Nixon, who resigned the Presidency in disgrace, and his Attorney General John Mitchell, convicted of Watergate crimes. (Inventory #: 012880)
$250.00 add to cart or Buy Direct from
Johnnycake Books
Share this item