The Biographical History of Sir William Blackstone and a Catalogue.. 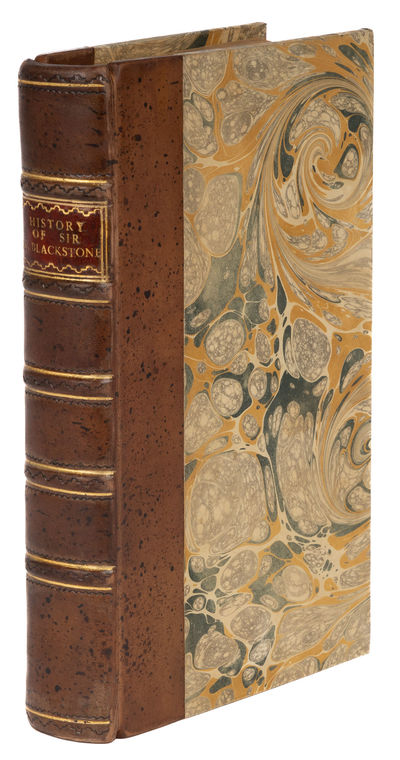 by Gentleman of Lincoln's-Inn; Douglas, D.
1782. London: Printed for the Author, 1782. London: Printed for the Author, 1782. The First Independent Biography of Blackstone Gentleman of Lincoln's-Inn. [Douglas, D., Attributed]. The Biographical History of Sir William Blackstone, and a Catalogue of All Sir William Blackstone's Works, Manuscript as Well as Printed, with a Nomenclature of Westminster Hall. The Whole Illustrated with Notes, Observations, and References. Also, A Preface and Index to Each Part. By a Gentleman of Lincoln's Inn. London: Printed for the Author, 1782. Three parts. [iv], xxix, [11], 125, [1] 24; [ii], iv, [4], 148; xxxvii, [1], 44, [30] pp. Lacking half-title before title page of second part. Octavo (8-1/4" x 4-3/4"). Recent period-style quarter sprinkled calf over marbled boards, raised bands, gilt and blind fillets and lettering piece to spine, endpapers renewed. Moderate toning to interior, faint dampspotting in places, offsetting and minor worming to margins of title page and following leaf. $1,500. * Based on Clitherow's biographical preface from the Reports, which was also included in several edition of the Commentaries, this is the first independent biography of Blackstone. The English Short-Title Catalogue notes this work is "[s]ometimes attributed to Sylvester Douglas, Baron Glenbervie and D. or Dr. Douglas; the attribution to Sylvester Douglas (b. 1743) is incorrect as p. xviii of the preface to the Nomenclature states "The compiler of this nomenclature attended the several courts of justice himself, in and from Trinity term, 1750." It also shows some copies have the indexes of all three parts bound at the rear of the text. Laeuchli, A Bibliographical Catalog of William Blackstone 603. English Short-Title Catalogue T55740. (Inventory #: 72918)
$1,500.00 add to cart or Buy Direct from
Lawbook Exchange
Share this item

Trial of a Slave in Berbice for the Crime of Obeah and Murder, 1823

1823
(click for more details about Trial of a Slave in Berbice for the Crime of Obeah and Murder, 1823)
View all from this seller>