The Works in Verse and Prose of William Shenstone, Esq... in two volumes. With decorations. [with] Vol. III. The Works... Containing letters to particular friends, from the year 1739 to 1763. 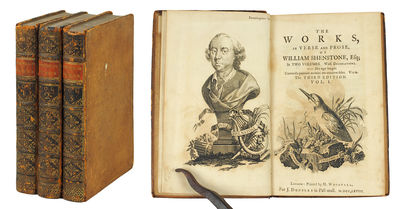 by Shenstone, William.
3 vols. London: Printed by H. Woodfall by J. Dodsley, 1768 and 1769. 3 vols. 8vo, 332, (4, index); vii, 343; viii, 360 pp. Engraved frontispieces, title vignettes in "vols. I & II, folding map of the Leasowes, several other vignettes and decorations. Contemporary full speckled calf, double gilt rules, backstrips with raised bands elaborately tooled in gilt and with red gilt-lettered labels, red sprinkled edges. Bindings a little worn, joints cracked, backstrips darkened, crowns chipped, some browning; still very handsome. Shelf label of Pull Court Library and bookplate of Richard Lane Freer in each vol. § The writings of William Shenstone (1714-63), English poet and one of the first practitioners of landscape gardening. Third edition of vol. I and II (1768, verse and prose), second edition of vol.III (letters, 1769), likely issued together."In 1744 Shenstone withdrew to The Leasowes... He now set about turning the estate into a landscape garden, or ferme ornée, 'which he did with such judgement and such fancy as made his little domain the envy of the great and the admiration of the skilful: a place to be visited by travellers, and copied by designers' (Johnson, 350). He continued to agonize about his decision to abandon literary society, and to revise The School-Mistress, but his main energies went into diverting streams to create waterfalls, and clearing undergrowth to display ‘natural’ beauties from advantageous viewpoints. . . Shenstone had been planning a subscription edition of his works, but in the event [of his death in 1863] Dodsley immediately set about publishing Shenstone's Works in Verse and Prose. The poems constituted volume 1 (1764); Essays on Men, Manners, and Things, including influential essays on gardening, with a plan of The Leasowes and an enthusiastic description by Dodsley, appeared as volume 2 (1764); and a collection of Shenstone's letters to his friends made up volume 3 (1769)." (DNB)Rothschild 1840 (second edition only); Tinker 1911 (first edition); ESTC T92447 and T135773. (Inventory #: 124671)
$400.00 add to cart or Buy Direct from
John Windle, Bookseller
Share this item

New Delhi : February 1949. Printed invitation on a letterhead sheet with typewritten additions
(click for more details about Original invitation and seating plan for a dinner held by the Jawaharlal Nehru, Prime Minister of the Dominion of India, on 23 February, 1949.)