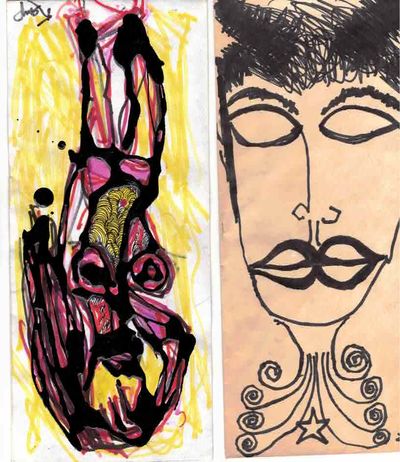 by Kemp, Anthony Eve
A significant collection of original material by Anthony "Eve" Kemp (b. 1963), an African American outsider artist, musician and activist whose work has been exhibited at the California African American Museum and the Patrick Painter, Inc. gallery, among others, and who founded the SPARK Art Project in 2016 in Flint, Michigan. The collection, ranging from 1997-2011 and including personal journals, original paintings, project proposals, celebrity photographs, visitor "guest" books, and over 1000 pieces of envelope art, documents Kemp's formative early struggles through his rise to recognition as a self-taught African American artist in the highly-competitive L.A. art scene.

Kemp, a Flint native, moved to Los Angeles with his rock band after graduating high school in the early 1980s. Following a modestly successful start as a musician, Kemp travelled through Europe, homeless and painting, and then returned to L.A. and devoted himself to fine art. Kemp's first solo exhibition, "Eve," was in 1999 at Julie Rico Gallery, in L.A., and he has since had several other solo exhibitions. Between 2004 and 2009 he had three untitled solo shows at West Hollywood's Muriel Kretchner Gallery, and in 2013 another at "The House of Eve," at P3 Gallery, in Las Vegas; his most recent was at Patrick Painter, Inc., in July 2017. "Curvature: Lines and Shapes," a two person exhibition (with Michael Kilgore) at the California African American Museum in 2014-2015, was his first museum exhibition. Documents within the collection suggest that Kemp's work has been included in several prominent private collections, including those of Edward Moses, John Onians, Sidney Poitier, Gwen Stefani, Mary Sean Young, and Oprah Winfrey, though we cannot confirm this.

The heart of the archive is the over 1000 pieces of artwork on mostly blank, unmailed envelopes - an appropriately transitional and vernacular medium for this artist. Although most are undated, those that are suggest that these envelopes chronicle Kemp's changing artistic sensibility from at least 2003 to 2010. The envelopes show Kemp employing a variety of stylistic approaches, from abstract to representational and from simple ink drawings to the heavily-layered mix-media for which he is best known; many are rough, seemingly unfinished or preliminary sketches or paintings. Additional artwork includes thirteen larger paintings and drawings, ranging in size from an 8-1/2" x 5-1/2" sketch to a 19-3/4" x 13-1/4" untitled portrait, which we speculate is a self-portrait, as well as one watercolor painting by another artist, "Allen"; a 19th century velvet-bound photograph album, quite worn and rubbed, into which five small unsigned drawings by Kemp have been slotted in place of photographs, with a title page of sorts inserted into the first leaf that reads, "Our own Mind can Be our Best Friend or our Worst Enemy"; a quarto-sized sketchbook of approx. 200 unnumbered pp, containing ink sketches (many black and red marker) and some text (presumed original); a small portfolio binder of reproductions of his work; and countless drawings and sketches throughout Kemp's personal journals.

The collection's ten personal journals are of varying sizes and lengths, and date from 1997 to 2011. Intimate and often written in states of high emotion, the entries in the journals record Kemp's personal as well as professional ups and downs, including the failure of several relationships, his wife's struggles with addiction, successful sales of his art, periods of homelessness, the death of his mother, his near "big break" as a contestant on the short-lived 2010-11 reality TV series on Bravo, Work of Art: The Next Great Artist, and much more. Scattered throughout the journals are the more mundane aspects of an artist's life: contact details of people he has met, drawings, reading lists, book titles, shows, photographs of himself and/or his daughter Paloma with Sidney Poitier and Oprah Winfrey, exhibit programs, etc.
A full list is available upon request. (Inventory #: 32460)
$10,000.00 add to cart or Buy Direct from
Thomas A. Goldwasser Rare Books
Share this item

We accept checks (U.S. funds on a U.S. bank only), money orders, wire transfers (please contact us for details), major credit cards, Paypal. Libraries and known customers may be billed. All items are guaranteed to be as described. Member, Antiquarian Booksellers Association of America, International League of Antiquarian Booksellers, Professional Autograph Dealers Association.
More from this seller

Photograph, inscribed by Hart Crane to his mother


(click for more details about Photograph, inscribed by Hart Crane to his mother)

The Temperamental Rose and Other Ways of Seeing Colour.; An Experiment with Light, 2008

Seattle 2008
(click for more details about The Temperamental Rose and Other Ways of Seeing Colour.; An Experiment with Light, 2008)
View all from this seller>