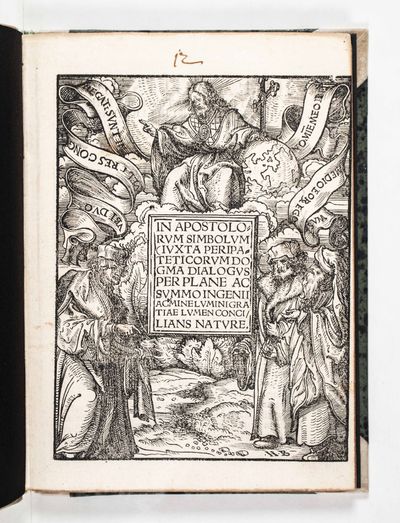 First Edition, one of two issues, with printer's device A (Proctor), and the first work to issue from the press of Johann Miller, who went on to publish other works by the present author. One of the principal european exponents of the Christian cabalistic movement in the sixteenth century (Ramos Maldonado), the formerly Jewish convert to Christianity, Paolo Ricci (ca.1480-1542) authored a number of treatises on Jewish mystical themes adapted for a Christian readership. Beginning in the late fifteenth century, this interest of Christian scholars and savants in Jewish mystical literature "... developed against the background of the Florentine Platonists, to whom are linked not only Reuchlin and Pico della Mirandola, but also people like Cardinal Egidio da Viterbo, Felice da Prato (Pratensis), Agustino Giustiniani, Pietro Galatini, Paolo Ricci, Guillaume Postel, Albrecht Widmanstetter and many others" (HV, 74).

Presented as a colloquium between Gometius, a Christian theologian, and three learned Jewish brothers, Schmidt-Biggemann judges the present opuscule to be "... one of the most thoughtful tracts on Christian cabala." Blau also holds a favorable view of Ricci's scholarship: "Pico's interpretation of the cabala gained so firm a hold on the minds of his period that Ricci, writing about 1510, had to defend his far more competent work in the cabala against the accusation that it was not cabalistic, because he had included material which Pico did not mention." He notes in conclusion: "None of the Christian interpreters knew much about the cabala. Ricci, of course, knew most. Even Reuchlin was preëminently indebted to one author. The works of Gikatilia, Recanati's Bible commentary, and the Book of Formation practically sum up the knowledge of the interpreters, save Ricci." Ricci first taught philosophy at Pavia and later served as personal physician Kaiser Maximilian I. He became quite wealthy and was ennobled with the castle of Sprinzenstein zu Lehen. Apart from his cabalistic studies, Ricci is noted as a diffusor of Aristotelianism to Germany. As a former Jew, it is quite notable that he opposed the catholic view on religious images and made efforts to reconcile the Lutherans and Catholics.