[THE MOON HOAX] THE CELEBRATED "MOON STORY," ITS ORIGIN AND INCIDENTS; WITH A MEMOIR OF THE AUTHOR, AND AN APPENDIX, CONTAINING, I. AN AUTHENTIC DESCRIPTION OF THE MOON; II. A NEW THEORY OF THE LUNAR SURFACE, IN RELATION TO THAT OF THE EARTH 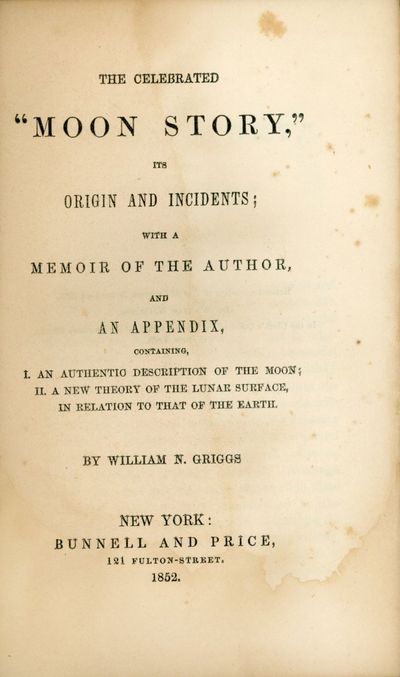 by (Locke, Richard Adams) Griggs, William N. (compiler)
New York: Bunnell and Price, 1852. 12mo, pp. [1-3] 4-143 [144: blank], flyleaves at front and rear, original decorated brown cloth, front and rear panels stamped in blind, spine panel stamped in gold and blind. First hardcover edition, and first printing of this text. This work, prepared by a close acquaintance of Locke, provides a biographical sketch of Locke, anecdotes about the reception of Locke's report, appendices presenting an authentic description of the Moon, and the text of Locke's successful hoax perpetrated in the NEW YORK SUN, in August 1835, which pretended to reveal a discovery that men and animals existed on the moon. The revelations, supposedly reprinted from the actually defunct EDINBURGH JOURNAL OF SCIENCE, were so cleverly wrought that, for a short time, the report was given credence in scientific circles in the United States and Europe. The report was soon denounced as a hoax by the public press and Richard Adams Locke (1800-1871), a reporter for the SUN, was identified as the perpetrator of the "ingenious astronomical hoax." Interest in the lunar discoveries increased the SUN'S circulation to more than nineteen thousand, the largest of any daily of that time. According to William Gowans who reprinted the story in 1859, Locke's account created such public interest that the owners of the SUN published sixty thousand copies of it in pamphlet form. The pamphlet was published in September 1835 and every copy was sold in less than a month. Nevertheless, the 1835 printings are rare and only a handful of copies survive. See Anatomy of Wonder (1976) 1-23; and (1981) 1-137. Bleiler, Science-Fiction: The Early Years 1348 and 1349. Clute and Nicholls (eds), The Encyclopedia of Science Fiction (1993), p. 728. Locke, A Spectrum of Fantasy, p. 142. Locke, Voyages in Space 130. Bleiler (1978), p. 125 (citing earlier editions). Reginald 09129B. Wright (I) 1704a (citing an undated 11-page edition probably published in 1835). Old damp stains to first and last few preliminary and terminal leaves and endpapers, two leaves (pages 125/126 and 1217/128 frayed and lightly chipped along lower edges, a good copy. (#168534) (Inventory #: 168534)
$150.00 add to cart or Buy Direct from L.W. Currey
Share this item
L.W. Currey Inc.
Offered by