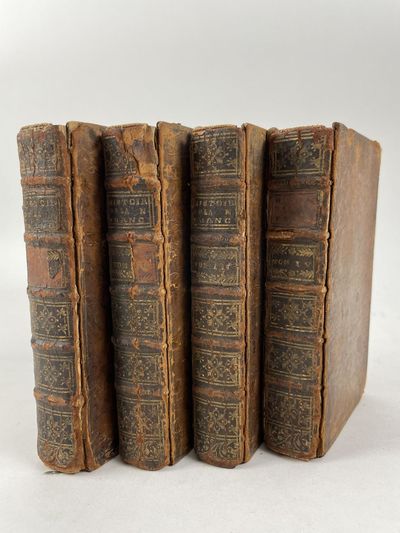 by Charlevoix, P[ierre Francois Xavier] de
Paris: Chez Didot, 1744. First Edition. Hardcover. 12mos., Four Volumes; G; Full calf, with dark brown leather spine labels and gilt lettering, spines banded with gilt tooling; Lacking Volumes V and VI; Boards show moderate plus wear to corners (boards exposed), significant cracking to leather along joints, moderate cracking to leather overall, and spine labels in varying degrees of wear; Textblocks have light plus shelfwear and occasional light soiling to red-dyed edges, and light plus age-toning to pages interiorly throughout; One map in Vol. I, and two maps and one plate in Vol. II, extend slightly beyond the textblock edge due to mis-folding, resulting in some minor chipping and age-toning; Ink emendations in an 18th-century hand appear on the verso of the ffeps of all four volumes; The ownership inscription of "Luis de Artaud" appears in ink on the sfep of all volumes, and the signature of former owner "Vivian Sorrelle" appears in pencil on the sfep of all volumes also; Lacking several maps (compared against description in Backer-Sommervogel): Vol. I - Three out of five fold-out maps intact // Vol. II - Two out of five maps intact // Vol. III - One out of two maps intact // Vol. IV - Complete (All five fold-out maps and one fold-out plate intact, in addition to all 43 botanical plates); CONTENTS: Vol. I ([4], [4], viii, 454 pages, [1]) -- Vol. II ([4], 501 pages, [2]) -- Vol. III ([4], 465 pages, [2]) -- Vol. IV ([4], 388 pages, [2]). Sabin 12136n; Faribault 132; Backer-Sommervogel 2:10178. RWO. This six-volume duodecimo format was released simultaneously with the three-volume quarto format, the publication of both announced in August of 1744. Each format edition was released in five issues in 1744.

Charlevoix (1682 - 1761) was a Jesuit historian and one-time agent for the French crown. It has been remarked that without this work, "the 150 years of French rule in America would have passed without a continuous contemporary history of the period" (Pouliot). It also remains an invaluable source of contemporary information regarding indigenous tribes. The maps Charlevoix included were based principally upon the work of cartographer Nicholas Bellin, and incorporated the most recent discoveries (up to the year 1742). 1354764. Special Collections. (Inventory #: 1354764)
$3,500.00 add to cart or Buy Direct from
Second Story Books
Share this item