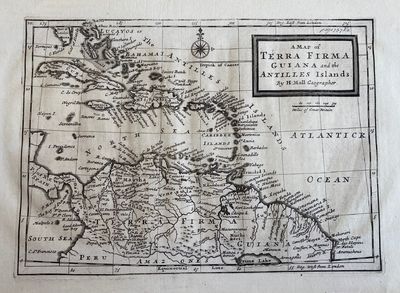 by MOLL, Herman
London: Osborne, Thomas, 1745. unbound. Moll, Herman. Map. Uncolored engraving. Image measures 7" x 10". Page measures 9" x 14 1/8" Map of the Caribbean islands and the northern coast of South America, extending from the southern tip of Florida and the Bahamas to the Amazon. Rich in inland detail, the map notes towns, rivers, lakes, and mountains throughout. A particularly interesting detail is the mapping of the legendary Lake Parima and the fabled kingdom of El Dorado or the city of Manoa along its western banks. Following Sir Walter Raleigh's 1595 publication of "The Discoverie of the Large, Rich, and Bewtiful Empyre of Guiana", in which he connected the city of Manoa with El Dorado, European interest in the regain grew considerably in the 17th century and various explorers set out in search of gold in Guiana. The city and the lake would continue to appear on maps until the early 1800s. From volume two of "A Collection of Voyages and Travels... compiled from the Curious and Valuable Library of the Late Earl of Oxford", published in 1745. In excellent condition. Of German or Dutch origin, Herman Moll (c. 1654-1732) settled in London in the 1670's where he worked as an engraver for Moses Pitt. By the turn of the century, Moll became the foremost map publisher in England, where he produced Atlases and maps. As an engraver, cartographer, mapseller and globemaker he appealed to the public with his unusual views and vignettes. As the demand for his work was sustained, he issued many revised editions of his work. Hard to find. (Inventory #: 308390)
$275.00 add to cart or Buy Direct from
Argosy Book Store
Share this item

New York : NuJapple Marketing , 1986
(click for more details about Harlem U.S.A.)
View all from this seller>