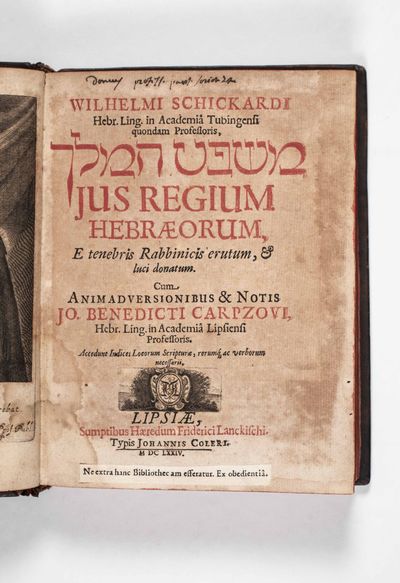 by Schickard, Wilhelm; Johann Benedict Carpzov (ed.)
Leipzig: The Heirs of Friedrich Lankischen / Johann Köhler, 1674. Second edition. Quarto. a-b4, A-3V4, 3X2 (= 274 leaves). [16], 482, [7, summarium], [43, indices]pp. Engraved frontisportrait, title in red and black, engraved map vignette (284): "Gentes Terrae Chanaan. [Hebrew:] Shiv'ah goyim qadmonim b'eretz kena'an", i.e., The Seven Original Nations in the Land of Canaan. Full contemporary calf with 5 raised bands, gilt title and tooled compartments at spine; gilt arms at boards, dentelles, edges stained red; bookplates, contemporary inscription at title. Spine and upper joint worn, but cords strong; text embrowned, light marginal dampstain throughout, else a good, complete copy with an exceptional provenance. One should like to imagine that the darkening and water staining of the text, along with the damage to the spine may well be attributable to the rough conditions under which the book was rescued from the burning library of its early owner, Pierre Daniel Huet, in 1693.

The work of one great polymath, from the library of another: Second edition of this analysis of ancient Israelite politics, serving as a defence of monarchy. First published in 1625, the work is here augmented with the detailed notes of Johann Benedikt Carpzov II (1639-1699), and contains a fine engraved portrait of the author, Wilhelm Schickard (1592-1635). A brilliant student and polymath, Schickard was named professor of Hebrew at the University of Tübingen in 1619, and succeeded his former teacher, Michael Mästlin to the chair of astronomy in 1631, though he continued to lecture in Hebrew. Schickard was largely self-taught in several Near Eastern languages. He wrote treatises on Semitic studies, mathematics, astronomy, optics, meteorology, and cartography, and was a skilled mechanic, cartographer, and engraver in wood and copperplate (DSB 12: p.162f.) The engraved map on page 284, "faithfully reproducing Schickard's original own woodcut engraving testifies to his considerable merits as cartographer and engraver" (Smitskamp). Catalogue des Livres de la Bibliotheque de la Maison professe des ci-devant soi-disans Jesuites (Paris, 1763), p. 22, no. 306 (Questions & réponses de Droit [des Juifs]). R. Smitskamp, Philologia Orientalis (Leiden: Brill, 1992), no. 132. VD17 3:006460U.

Provenance and annotations: The copy of Pierre Daniel Huet (1630-1721), Bishop of Avranches, with his gilt arms at the boards, shelfmark and engraved bookplate recording the living gift of his library to the Jesuits, dated 1692; Jesuit order of Paris with inscription at title. One of the most learned and industrious polymaths of his day, Huet edited the famous Delphin series of the Latin classics. Upon his death, what remained of his great library of books and manuscripts (after the fire in his house in the Faubourg Saint-Jacques, in 1693) was donated to the Parisian library of the Maison Professe des Jesuites. When the Jesuits were expelled from France in 1762 the library was put up for sale at auction. Huet's nephew and heir intervened; his uncle's collection was subsequently acquired by Louis XV and incorporated into the Royal Library. See: D. Murry, "Bibliography: its Scope and Methods" [in:] Records of the Glasgow Bibliographical Society 1 (1913): 1, no.1. On the title a printed strip pasted in the lower margin contains the following text: 'Ne extra hanc Bibliothecam efferatur. Ex obedientiâ.' Modern printed bookplate of Gabriel Achinard at rear paste-down: "In libris solatium" Hebrew title: משפת המלך. (Inventory #: 48822)
$1,750.00 add to cart or Buy Direct from
Eric Chaim Kline Bookseller
Share this item