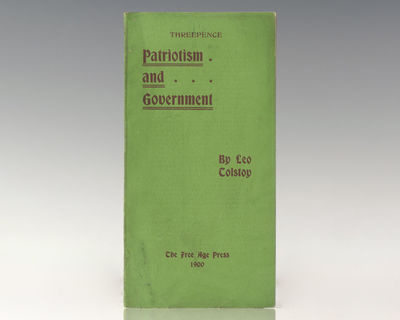 by Tolstoy, Leo
Maldon: The Free Age Press, 1900. First edition of Tolstoy's classic work on patriotism. Octavo, original wrappers. In near fine condition. Rare. Born to an aristocratic Russian family in 1828, Leo Tolstoy is best known for his novels War and Peace and Anna Karenina, often cited as pinnacles of realist fiction. Tolstoy's bibliography includes dozens of short stories, several novellas, plays and numerous philosophical essays. His writing consistently attempted to convey the experience of living in Russian society realistically, drawing from his own experience and creating many of his protagonists in his own image. The Sevastopol Sketches include three short stories recording Tolstoy's experiences during the Siege of Sevastopol which later formed the basis of many of the episodes in Tolstoy's magnum opus, War and Peace. (Inventory #: 135278)
$450.00 add to cart or Buy Direct from
Raptis Rare Books
Share this item