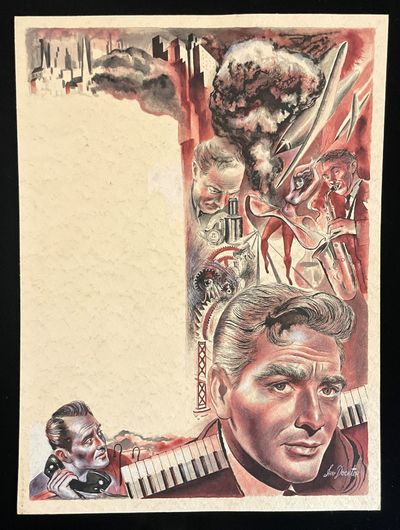 No Binding
by Docktor, Irv (artist)
No Binding. Very Good. An original illustration, designed to wrap-around text, by prolific commercial artist Irv Docktor for an article entitled "A Faith for Young Americans" by Roland Gammon in the April 1950 issue of Redbook Magazine. On thick artist paper, approx 10.25x13.5" in watercolor and black ink. Richly colored in hues of brown, sienna and black, with Docktor's fine pen and ink lines, signed by him lower right corner. On the verso is Redbook label and two name/address stamps of Docktor, 27-33 166th St, Flushing NY IN3-3380 Irv Docktor (1918 - 2008) was an American illustrator and educator best known for his work as a book and magazine illustrator in the 1950s and 1960s. His versatile work appeared in hundreds of books, best known for hardcover dustjackets like Patricia Highsmith's "Strangers on a Train" and five first editions of Robert Heinlein science fiction novels including "The Moon is a Harsh Mistress". He also illustrated cover designs for Playbill, like his original art for the program for Robert Anderson's landmark drama "Tea and Sympathy (Inventory #: 012904)
$350.00 add to cart or Buy Direct from
Johnnycake Books
Share this item