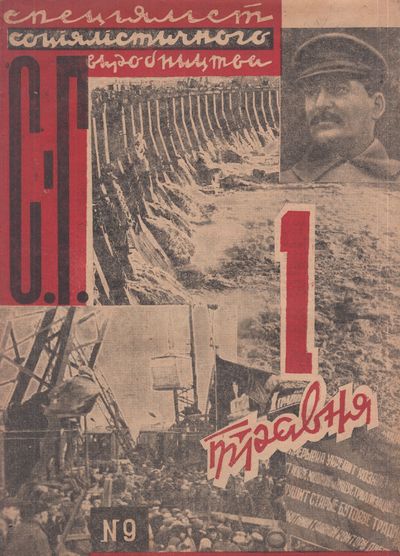 Kharkiv: Vydavnytstvo Derzhsil'hospvydav, 1932. Octavo (30 × 21.5 cm). Original pictorial self-wrappers; 26 pp. Unopened and uncut. Light soil to rear wrapper, else very good. A single issue of the bi-weekly journal of agricultural and technical unions with Mayday photomontage wrappers (unattributed). The issue is dedicated to the completion of Dniprobud (Dneprostroi) a Dniepr Hydroelectric Power Station which opened on May 1st 1932. A photomontage centerfold depicts the construction of the dam in 1927-1932, one of the largest industrial construction projects in the USSR at the time. Articles in the issue discuss the construction, opening, and projected benefits of the hydroelectric dam, complete with numerous tables which report the progress. In 1932-33, the Kharkiv region suffered especially heavy losses during Holodomor, the man-made famine caused by forced Soviet collectivization, which took millions of lives. This journal, along with many other Ukrainian language periodicals charged with propagating nationalist sympathies over Soviet goals, ceased publication in this period.

As of January 2022, KVK, OCLC only show two North American holdings, both only individual issues. (Inventory #: 51856)
$450.00 add to cart or Buy Direct from
Bernett Penka Rare Books
Share this item