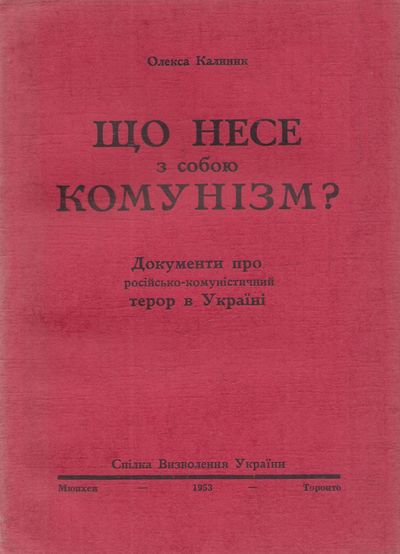 by Kalynyk, Oleksa
Munich-Toronto: Spilka Vyzvolennia Ukrainy, 1953. Octavo (20.6 × 15 cm). Original printed wrappers on red stock; 112, [2], [28] leaves of plates, [1] pp. Very good. This volume discusses the Great Famine, or Holodomor, in the Krynychansky region in central Ukraine, based on original government documents saved and smuggled to the West by the author, which are reproduced within. Published by the Society for Ukraine's Liberation in Canada, the present work also appeared in English in 1955 as "Communism: the enemy of mankind: documents about the methods and practice of Russian Bolshevik occupation of Ukraine." The author, whose real name was Aleksei Samoilenko, was apparently imprisoned in Soviet labor camps for six years before serving as a town official under German occupation of Ukraine during WWII, while also helping the Ukrainian nationalist movement and studying the Holodomor. After the war, he lived in a camp for Displaced Persons (DPs) at Augsburg, where he founded the Union of Ukrainian Youth and several publications, before moving to the United States in 1958. (Inventory #: P6679)
$150.00 add to cart or Buy Direct from
Bernett Penka Rare Books
Share this item