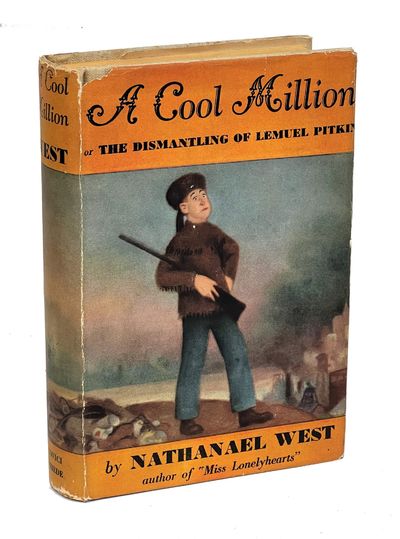 by West, Nathanael
New York: Covici-Friede, 1934 First edition, first printing. Publisher’s tan cloth with titles in green to front board and spine; original orange dust jacket with wraparound illustration of youth holding a gun, lettered in black, jacket designed by William Cotton. Near fine book with light spotting to cloth (mostly around the spine), “155” written neatly to bottom edge of text block, some light soiling to bottom edge, touch of offsetting to front free endpaper; near fine unclipped jacket with small chip to top left corner of front panel, some rubbing along folds and small nicks to corners and spine ends, else bright and clean. Overall, an excellent copy in a beautiful and vibrant example of its scarce dust jacket. A Cool Million tells the story of Lemuel Pitkin, a poor boy who optimistically goes out into the world to find his fortune and is met with a series of devastating mishaps, most of them resulting in some type of disfigurement. At the same time, an unscrupulous banker and former president named Shagpoke Whipple uses anti-Semitic and anti-communist rhetoric to become a fascist leader. The book satirizes Horatio Alger’s “rags to riches” stories and shines a light on the dark side of the American Dream. The literary critic Harold Bloom included the book in his prestigious canon of Western literature. F. Scott Fitzgerald, whose classic book The Great Gatsby (1925) also satirizes the American Dream, praised A Cool Millions’ “scenes of extraordinary power” and “vividly drawn grotesques.” . First Edition. Hard Cover. Near Fine/Dust Jacket Included. (Inventory #: NW006)
$7,500.00 add to cart or Buy Direct from
B & B Rare Books
Share this item