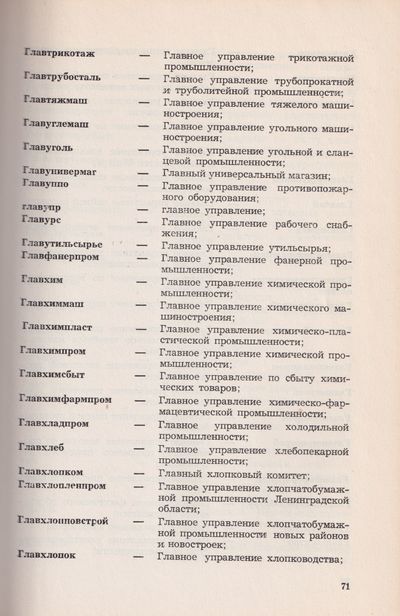 Munich: Institut po izucheniiu istorii i kul'tury SSSR (Institute for the Study of the History and Culture of the USSR), 1954. Octavo (22 × 16 cm). Original printed wrappers; 304 pp. Light stain to top corner of front wrapper; lower corner creased; wrappers toned; still about very good. A comprehensive list of the often mind-boggingly difficult and arcane Soviet acronyms, used both for names of official institutions (such as Narkomattiazhmash, UBPRKKA, or Muzpromsoiuz) and nearly all other aspects of Soviet life. Compiled by the Institute for the Study of the History and Culture of the USSR, which operated in Munich in 1950-1971 with clandestine support of the CIA. The official mission of the Institute was a "comprehensive study of the USSR and familiarization of the Western world with the results of their research." In fact, the institute was one of the centers for training future secret agents to carry out sabotage missions on Soviet territory (See Benjamin Tromly, Cold War Exiles and the CIA, p. 2). The institute was created by the NTS (National Alliance of Russian Solidarists), an anti-communist, right-leaning émigré organization founded in Belgrade in 1930, with branches across Europe. With the goal of defeating Communism in Russia, during WWII NTS controversially sought collaboration with Nazi Germany. The organizational headquarters of NTS relocated from Belgrade to Berlin in 1941. After the war NTS was headquartered in Munich where this item was published. During the Cold War the CIA funnded many of the NTS publishing and political projects, including production of Russian language anti-communist propaganda for distribution in the Soviet Union and among the Russian-speaking military personnel stationed in East Germany, as well as the work of a publishing house "Posev" (The Sowing) and a radio station Radio Free Russia. Publications such as this one were produced for NTS trainees some of whom were later recruited to enter the Soviet territory and either form local cells or distributed anti-Soviet information.

As of June 2022 KVK, OCLC show copies at LSE, Cambridge, Edinburgh, and the National Library of Australia. (Inventory #: 52068)
$125.00 add to cart or Buy Direct from
Bernett Penka Rare Books
Share this item