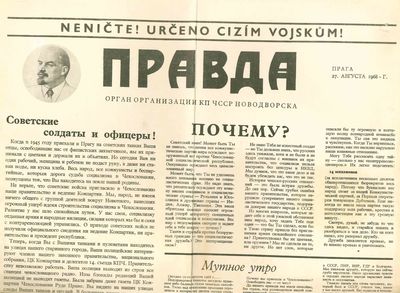 Prague: self-published, August 27, 1968. Large broadside, single leaf measuring 51 × 70 cm printed to recto only. Light soil; vertical and horizon creases; still about very good. Disguised as an issue of Pravda, the main Soviet newspaper, this anti-invasion broadside (apparently intended to mimic a wall newspaper) was one of the many acts of nonviolent resistance to the Soviet invasion of Czechoslovakia on August 20, 1968. Addressing the "Soviet soldiers and officers" occupying Prague, this Russian language "wall newspaper" asks the occupiers to question their orders and side with the position of the invaded Czechs. The title plays on the main Soviet newspaper Pravda (Truth) while the central article in the newspaper is titled simply "Why?" Printed a week after the invasion, the publication includes slogans such as: "A tank is your argument? We are ashamed for you!", "You cannot put an entire people behind bars," "Thank you for your lecture on friendship!", "The tanks are yours-the truth is ours." Photographs showing destroyed streets in Prague read "This is your truth?". Czech text along the top of the publication reads: "Do not destroy! Intended for foreign troops!"