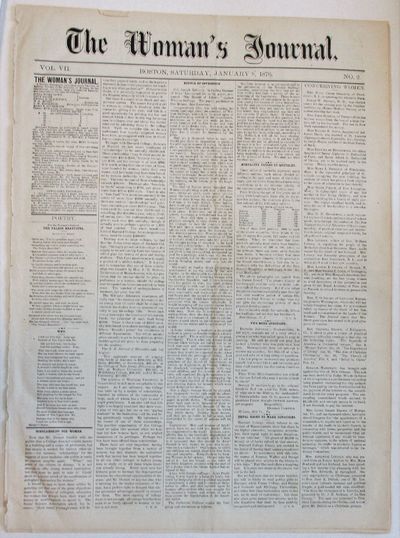 The Editors explain that their Journal was "A Weekly Newspaper, published every Saturday in Boston, devoted to the interests of Woman -- to her educational, industrial, legal and political Equality, and especially to her right of suffrage." A prominent group of Women's Rights advocates, the editors, in addition to Howe, were Lucy Stone, Henry Blackwell, Thomas Wentworth Higginson, and Mary A. Livermore. The Britannica describes the Journal as an "American weekly suffragist periodical, first published on January 8, 1870, by Lucy Stone and her husband, Henry Blackwell, to address a broad segment of middle-class female society interested in women's rights. As an official publication of the American Woman Suffrage Association (AWSA), it published the views of the AWSA."
This issue has articles on woman suffrage, attacks Harvard for refusing to admit women, advocacy of education scholarships for women, property rights of women, suffrage convention in Colorado, Massachusetts Governor Rice's endorsement of woman suffrage, the National Union of British Working Women, and other matter. Advertisements are printed; tobacco and liquor ads were prohibited. (Inventory #: 38264)
$350.00 add to cart or Buy Direct from
David M. Lesser, Fine Antiquarian
Share this item
David M. Lesser, Fine Antiquarian Books LLC
Offered by