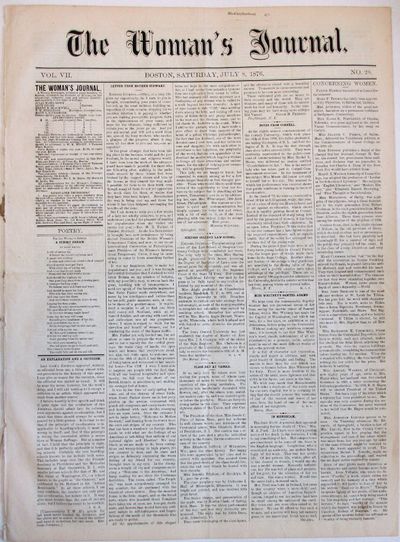 The Editors explain that their Journal was "A Weekly Newspaper, published every Saturday in Boston, devoted to the interests of Woman -- to her educational, industrial, legal and political Equality, and especially to her right of suffrage." A prominent group of Women's Rights advocates, the editors, in addition to Howe, were Lucy Stone, Henry Blackwell, Thomas Wentworth Higginson, and Mary A. Livermore. The Britannica describes the Journal as an "American weekly suffragist periodical, first published on January 8, 1870, by Lucy Stone and her husband, Henry Blackwell, to address a broad segment of middle-class female society interested in women's rights. As an official publication of the American Woman Suffrage Association (AWSA), it published the views of the AWSA."
In this issue Higginson argues in favor of co-educational schools; articles on the only woman graduate of Simpson College Law School; class day at Vassar; doings of various women, including Fannie Kemble and Mrs. Abraham Lincoln, who "proves to be sane." Also, a speech by Wendell Phillips, The Woman Suffrage Centennial, brief articles on presidential contenders Hayes and Tilden, and other matter. Advertisements are printed; tobacco and liquor ads were prohibited. (Inventory #: 38260)
$350.00 add to cart or Buy Direct from
David M. Lesser, Fine Antiquarian
Share this item
David M. Lesser, Fine Antiquarian Books LLC
Offered by