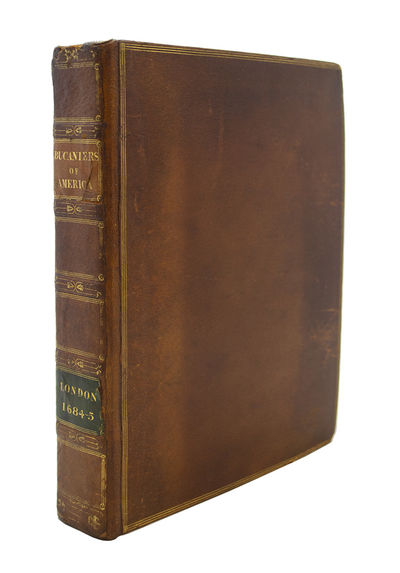 by EXQUEMELIN, Alexandre Olivier
The Premier Piracy Book EXQUEMELIN, Alexandre Olivier. Bucaniers of America; or, A True Account of the Most Remarkable Assaults Committed of Late Years upon the Coasts of the West-Indies, by the Bucaniers of Jamaica and Tortuga, both English and French...London: Printed for William Crooke, 1684-1685. First edition in English of Volume I, first edition of Volume II. Altogether, four parts in all. Bound together in one quarto (9 x 6 7/8 inches; 233 x 176 mm.). Volume I complete with four engraved portraits, four engraved plates (two double-page) one engraved double-page map of Panama, engraved allegorical head-piece, and one woodcut. Volume II complete with two engraved maps (both folding; one is very large), thirteen full-page engraved maps and charts (within pagination), one full-page engraved city plan, and forty-two woodcuts of coast elevations in the text. Contemporary sheep, rebacked with original spine laid down. Spine with two leather labels, one tan, one green. Boards triple ruled in gilt. Gilt ruled dentelles. Spine stamped and labled in gilt. All edges gilt. Green coated endpapers. Some scuffing and sunning to boards. Some chipping to head and tail of spine and board edges. Almost invisible large closed tears to leaves H2 and H3 of Volume II, professionally repaired with no loss of text. Small hole affecting only two letters on leaf CC of Volume II. Some occasional small spots of toning. Previous owner's nautical themed bookplate to front pastedown. An outstanding copy; exceptionally clean and with very generous margins . The classic book on buccaneering. Exquemelin was an eyewitness of many of the events he records here, and the work has been the source and inspiration for innumerable tales, novel, plays, and films. ìPerhaps no book in any language was ever the source of so many imitations, and the source of so many fictions as thisî (Sabin). The first volume of Exquemelinís work first appeared in Dutch (Amsterdam, 1678). This first edition English was translated from the Spanish version of Alonso de Buena Maison. The second volume, containing an account of the Pacific voyage of Bartholomew Sharp, was written by the English pirate Basil Ringrose. The two firsts are rarely found together, as Church notes: ìIt is more usual to find Volume I of the first edition alone; or Volume I of the second edition combined with Volume 2 of the first edition.î Church 689. Hill, pp. 99-100. Sabin 23479. Wing E3894 and E3897. HBS 68717. $22,500 (Inventory #: 68717)
$22,500.00 add to cart Available from
Heritage Book Shop
Share this item