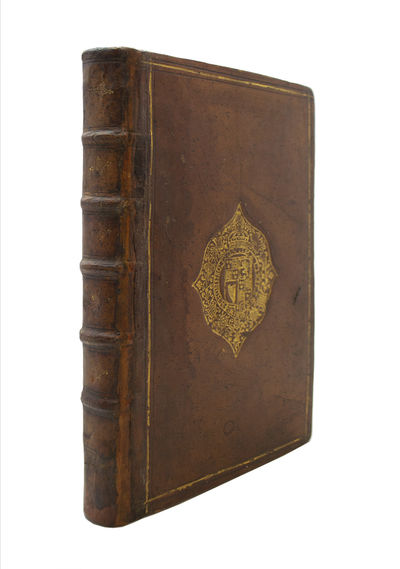 by GODWIN, Bishop Francis
First English Edition GODWIN, Bishop Francis. Annales of England. Containing the reignes of Henry the Eighth. Edward the Sixt. Queene Mary. Written in Latin by the Right Honorable and Right Reverend Father in God, Francis Lord Bishop of Hereford. Thus Englished, corrected and inlarged with the authorís consent, by Morgan Godwyn. London: Printed by A. Islip and W. Stansby, 1630. First edition in English. A translation of Rerum Anglicarum Henrico VIII. Edvvardo VI. et Maria regnantibus, annales. Small folio (11 x 6 3/4 inches; 278 x 172 mm). [16], 394 [i.e. 294], 293-342, [2, blank] pp. With engraved ornamental woodcut title-page. The sections on Edward VI and Mary both have separate dated title page, with ornamental woodcut border, but pagination and register is continuous. With engraved portraits for each section. Henry VIII portrait is signed: "T. Cecill sculp.", the others are unsigned. With initial and final blank. Although entered to both pr[inter]s., the whole book was app[arently]. pr[inted]. by Stansby"-STC. There is also a reissue, printed the same year with cancel general title page with the imprint "printed by W. Stansby and are to be sold by I. Smethwicke." Contemporary full speckled calf, rebacked with original spine laid down and preserving original endpapers. Boards ruled in blind and gilt, with gilt central armorial lozenge. All edges speckled red. With contemporary ink inscription on front flyleaf. A closed tear, neatly repaired to front blank. Tiny wormhole to inner margin, not affecting text. Leave Nn2 with paper flaw, not affecting text. Overall very good. "Like his near contemporary Francis Bacon, Godwin was among the Jacobean exponents of the project for a new national history of England, regarding Polydore Vergil's Anglica historia as an inadequate work, written by a foreigner and a papist. He found Vergil's treatment of the sixteenth century especially inadequate, and it did not, of course, cover the whole century. In 1620, writing to his old friend Camden, he urged the latter to print the second part of his Annales of Elizabeth's reign, which did not, however, occur until after Camden's death. Inspired by the first part of Annales, and by the erudition in Camden's earlier Britannia, Godwin embarked on his own history of the middle Tudors, Henry VIII, Edward VI, and Mary. Calling for a complete national history based on the sort of erudition that had marked Britannia, he remarked that 'our antiquaries may justly be taxed of sloth' (Rerum Anglicarum ... annales, sig. A2r)...The book that resulted, Rerum Anglicarum Henrico VIII. Edwardo VI. et Maria regnantibus, annales nunc primum editi (1616) unfortunately did not live up to the high mark Godwin had set. He drew on earlier foreign historians such as Francesco Guicciardini, Johannes Sleidan, Joachim du Bellay, Jacques-Auguste de Thou, and on a variety of Scottish writers; for English accounts he turned to John Stow's chronicles, and to the yet-unpublished life of Cardinal Wolsey by George Cavendish. He used some unspecified 'publique records' (Rerum Anglicarum ... annales, 141) for certain episodes such as Anne Boleyn's trial and death, documents which he probably obtained from Sir Robert Cotton, but the book is not founded on these materials in the way that Camden's Annales were based on the comparable records for Elizabeth's reign (though Camden, as the first historian of Elizabeth, had had little choice in this regard, having few ëauthoritiesí to which to turn). Godwin's son Morgan translated the history into English, with some additions (including passages lifted wholesale from Cavendish) as Annales of England in 1630." (Oxford DNB). HBS 68726. $1,250 (Inventory #: 68726)
$1,250.00 add to cart Available from
Heritage Book Shop
Share this item