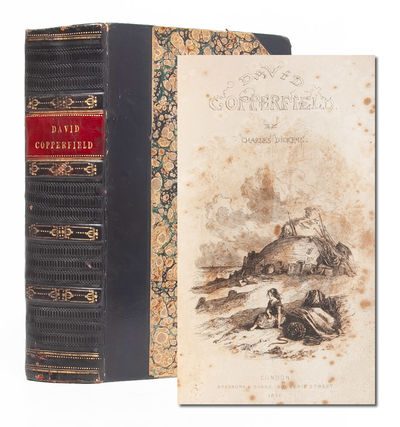 by Dickens, Charles
London: Bradbury & Evans, 1850. First Edition. Very Good +. Nineteenth century half-calf over marbled boards. Light to moderate foxing on most plates. Contemporary owner's name on the first blank leaf, bookplate on the front paste-down. Subtle repair to the lower leather joint. A handsome copy of one of Dickens' best, and his most autobiographical novel.

"David Copperfield has always been among Dickens' most popular novels and was his own 'favorite child.' The work is semi-autobiographical and although the title character differed from his creator in many ways, Dickens used him to relate early personal experiences that had meant much to him -- his work in a factory, his schooling, and his emergence from parliamentary reporting into successful novel writing" (Britannica). Like many of Dickens' novels, David Copperfield uses an individual, tracing his widening system of relationships as he moves through life, to explore the interconnectedness of humans, the way race, gender, and class can affect their paths, and the degree to which we have free-will. Very Good +. (Inventory #: 4937)
$1,500.00 add to cart or Buy Direct from
Whitmore Rare Books
Share this item