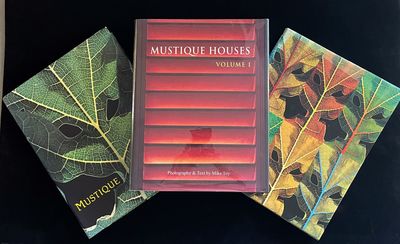 by Vaughn, Robert (editor). Toy, Mike
NY/Mustique: Arne Hasselqvist & Alfred Schweitzman, 1994. 1st Edition. Hardcover. Near Fine/Near Fine. Three uniform titles, different authors and changing publishers, but same coffee-table style format. Vaughn edits both MUSTIQUE volumes; MUSTIQUE II (2000) was published by Maiden Lane Publishing, Accord NY. HOUSES was written, and photographed, by Mike Toy and self-published by him in 2010. There is no HOUSES Volume II yet as we can tell. Solid copies, some incidental sunning to the dustjackets of MUSTIQUE volumes and owner names in two of the books. Loads of splashy, sunny photos of beaches, fabulous houses and celebrities like Pierce Bronson and Mick Jagger, who have visited along with mostly British swells like Princess Margaret since the island became the most exclusive international Caribbean refuge in the 1960s and 70s. Extra shipping charges wll apply. (Inventory #: 012918)
$350.00 add to cart or Buy Direct from
Johnnycake Books
Share this item

OVER AND ABOVE OUR PACIFIC

NY : Brentano's , 1941
(click for more details about OVER AND ABOVE OUR PACIFIC)