A grouping of Pamphlets focused on Family Planning and Contraception in the U.K. 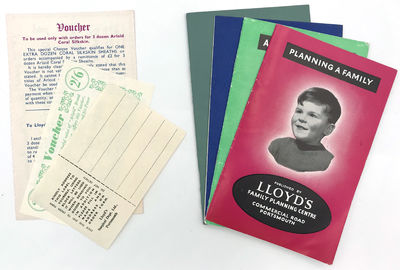 by A. H. Lloyd
United Kingdom: Lloyd's Family Planning Centre, 1950s. Very good to fine. Minor toning, light rubbing to extremities.. Five (5) items relating to modern family planning and contraception in the United Kingdom, marketed towards women and/or couples in the mid-to-late 1950s. Four of the items were published by Lloyds Family Planning Centre in Portsmouth, which was established in 1890 by Walter Henry Lloyd as a pharmacy, later becoming a successful retailer of discrete mail-order contraceptives and informational booklets.

"Modern Family Planning". London: Family Counsel Publications, 1950s. An informational booklet on contraceptives by Dr. Winifred De Kok, written primarily for women: "Because the burden of childbearing and child-rearing falls on the woman rather than on the man, I believe that wives should feel themselves responsible in this matter [and] learn all they can" (p. 2). Includes lengthy discussion of the new "Oral Contraceptive Tablet" on the market, and whether it is the contraceptive of the future. 12mo (6.75" by 4"), pp. 16. Stapled in original printed green wrappers.