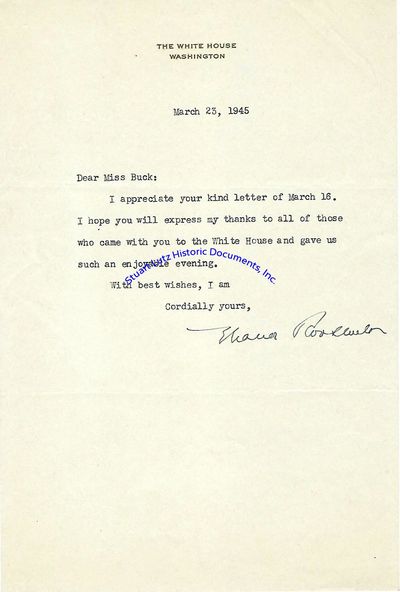 signed
by ELEANOR ROOSEVELT
ELEANOR ROOSEVELT (1884-1962). Roosevelt was the longest-serving First Lady of the United States, as well as a noted humanitarian. PEARL BUCK (1892-1973). Buck, an American writer, won both the Nobel Prize and Pulitzer Prize. She was born in West Virginia, the daughter of missionaries, and lived in China until 1933. Many of her works discuss China and its people. Her best known works are The Good Earth, Dragon Seed, My Several Worlds and A Bridge for Passing. TLS. 1pg. March 23, 1945. The White House, Washington. A typed letter signed “Eleanor Roosevelt” as First Lady. She wrote to American author Pearl Buck on White House letterhead just three weeks before FDR’s death. “Dear Miss Buck: I appreciate your kind letter of March 16. I hope you will express my thanks to all of those who came with you to the White House and gave us such an enjoyable evening. With best wishes, I am Cordially yours, Eleanor Roosevelt”. In fine condition, with a faint wrinkle in the upper-right corner. (Inventory #: 5657)
$450.00 add to cart Available from
Stuart Lutz, Historic Documents, Inc.
Share this item