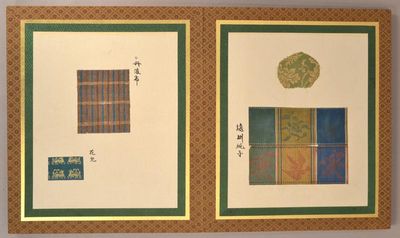 by Uemura Rokurō 上村六郎
194. Uemura Rokurō 上村六郎. Saika 彩華 [album of fabric samples]. C. 1940s-1950s. 34.2 x 30cm orihon folding album with damask covered boards and a centered, brushed silk title slip is stored in a 34.5 x 30cm chitsu with centered and brushed paper title slip. The inside front cover of the chitsu has three vertical lines of brushed script in Japanese including Uemura's signature. The inside covers and front of the first and last page are covered in gold foil.

A total of 45 samples of silk fabric on 26 pp (12 on one side and 14 on the other). Mostly silk brocade with an embroidered and a heavier woven fabric as well. Lovely muted palette of gold, cream, browns and blues with touches of persimmon and green. The samples are mounted on boards, one to four per page, and framed in dark green, gold foil and a patterned brocade fabric that covers the edges of each page. One page features a circular fabric that is heavily embroidered and edged with embroidered ribbon. The samples are attractively arranged; the album was made with great care as to presentation and preservation. A number of the samples are identified with brushed Japanese script. A few of the pieces appear to be older and show signs of wear with holes that are most likely prior to being laid down.

A sample of striped cloth is rough to the touch and labeled Tanbafu 丹波布. Tanba is a former prefecture in the area between Kyoto and Osaka that was known for its cotton and cotton blend striped fabric. A navy brocade with a gold animal pattern is labeled Hana Usagi 花兎 [flower rabbit], a repeating pattern in which the rabbit is looking over its shoulder, that is still used in women's kimono. It was common in the Momoyama period (approx.1583-1600), when it was favored by merchant and shipper Suminokura Ryōi 角倉了以 (1554-1614) in a variation known as Kakukura. A gold-on-gold brocade is entitled Kumo Shō 雲鷦 [cloud wren] and portrayed as a bird among thin wisps. A few of the samples are labeled Manrekidonsu 万暦緞子 and may originate from China. This "Wanli brocade'' was first made during the time of the Wanli Emperor in China, who reigned from 1572-1620 during the latter part of the Ming Dynasty.

The album was assembled by a scholar of weaving, dyeing and textile, Akashi Somebito 明石染人, given name Akashi Kunisuke 明石国助 (1887-1959). He was an author and a lecturer at Kyoto City University of the Arts 京都市立美大学 and spent many years at Kanegabuchi Spinning Co., Ltd 鐘ケ渕紡績株式会社, traveling to India and Egypt for work. The fabric itself was owned by his mentor Tsurumaki Tsuruichi 鶴巻鶴一 (1873-1942), also a fabric artist and expert, who is credited with bringing about the popularity of the Japanese wax-resist dyeing technique Rōketsuzome 蝋纈染 (also Rōzome 蝋染) during the Taisho period. According to the handwritten note, this book is from the personal library of 上村六郎 Uemura Rokurō [1894 - 1991?], perhaps the most influential scholar of traditional dyeing techniques of both cloth and paper in Japan who was also an expert on international techniques of traditional dyeing. He was the author of numerous books and articles on these subjects over the course of his long life and compiled fabric sample albums.

The chitsu has been professionally repaired.There is a label on the rear with a Japanese character. The album itself is in good condition. There are many beautiful patterns and colors to enjoy that are important to the history of fabric and kimono in Japan. (Inventory #: 90989)
$2,500.00 add to cart or Buy Direct from
Boston Book Company
Share this item