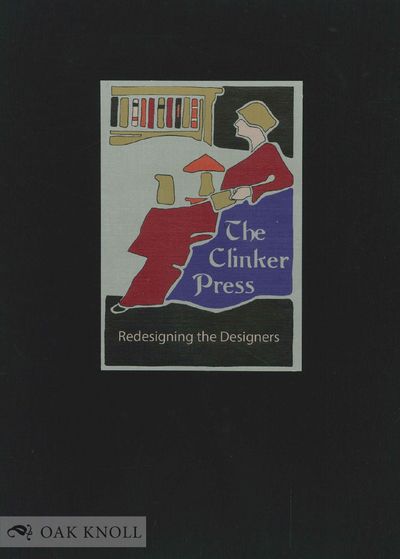 cloth box with a fine press label printed on the lid

From the printer, Andre Chaves: "This project was based on some concepts regarding the Designers who were in some fashion associated with the Arts and Crafts Movement. It is based on the potential they left us which allows a further development, in various degrees inspired by their work. The concepts fall in the following groups.

Some designers produced their work with great inventiveness but stopped producing at an early stage. Beardsley because of his untimely early death at 24 years. Dard Hunter because, at a certain point in his life, changed he the focus of his career from a graphic designer to study and write extensively on hand-made paper in various countries and print them himself but no longer with the same creativity shown in his early work. Margaret McDonald because of the shift in fashion where her designs, along with Mackintosh's, simply were no longer considered desirable and fell into disfavor. Will Bradley had a long creative career but went into very different directions and the poster design he's so well known for was left behind.

Some designers, like Frank Lloyd Wright, were so imaginative that the early work changed over time in his long and productive career, so that Design could be derived from his early work. A similar reason can be used for designs of Josef Hoffman, who designed a large number of objects, industrially related as well as craft oriented, as well as posters.

Walter Gropius falls into an unusual category as he represented not only his vision of design but also a School, the Bauhaus, so a Design derived partly from each could be used. The Irish George Augustus Moore was more an Art critic than a Designer, but his quote touched the subject so well that I felt he deserved to be included.

Three early Designers were included for their importance in the formation of the ideas of the Arts and Crafts Movement. A. W. M. Pugin, Gothic Revival originator, was extremely creative but also had a short life. Christopher Dresses focused his design more on industry, but maintained rigid control over the production and taught a lesson to the Arts and Crafts enthusiasts, that industry should not be entirely ostracized if control is exercised. Lewis F. Day was truly the man who straddled the Esthetic Movement and the Arts and Crafts Movement, his creativity allowed great variety in redesigning.

Two of the group are more difficult to categorize and fall into their own. William Morris requires an essay to convey his graphic ideas of design above and beyond his book publishing principles. However, a modification of his borders made into brackets with a quote of one of his better-known poems seemed applicable. A.W. Dow was really more of a fine artist than a Designer, although his early career did include various posters and magazine covers. It was relatively easy to derive ideas from either, but I chose a flat landscape from the part of the country, Massachusetts, he so loved.

So, I'm presenting posters that clearly show their origin within these individuals, but they have never been presented exactly as such. These are unique and represent my view of their creativity and should be judged as such. Paraphrasing Lewis F. Day, he said we should neither entirely avoid nor slavishly copy precedent art, but, along with Nature, use it as inspiration for new Design. (Inventory #: 137329)
$375.00 add to cart or Buy Direct from Oak Knoll Books
Share this item