[BINDINGS]. A Collection of facsimiles from examples of historic or artistic book-binding [bookbinding], illustrating the history of binding as a branch of the decorative arts. BOUND WITH: Examples of the art of book-illumination during the Middle Ages reproduced in facsimile 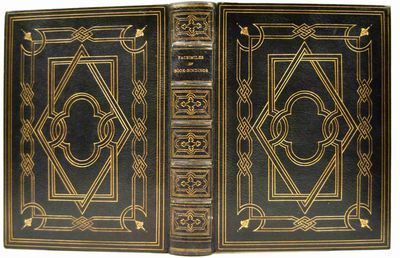 by Bernard Quaritch
London: Quaritch, 1889. First Edition. Thick 4to (ca. 27.5 x 21 x 5 cm). Bound in contemporary blue crushed levant morocco after a Grolier binding depicted on Plate [23] of the present catalogue: gold line fillets with ornaments in corners; inside borders gold-tooled; blue-green watered silk endleaves and pastedows; spine gilt (expertly rebacked), all edges gilt (front binder's blanks with short tears at fore-edges; final endleaf loose). In original marbled pull-off case (small splitting on lower edge). Front wrapper of Part XI of the Facsimiles bound in. BOOKBINDINGS: 36 pp. + 103 plates of facsimiles of historic and artistic bookbindings, executed in gold and colors. BOOK-ILLUMINATION: [3] pp. + 9 plates of facsimiles of ancient manuscripts, executed in gold and colors. The two works are bound together as one volume, with all 112 plates interleaved with thin paper, thereby eliminating any offsetting which disfigures other copies. ¶ A volume of great beauty and historical interest, finely bound, and containing a total of 112 color-printed lithographs by Griggs, illustrates important bookbindings from the Gothic and Renaissance era. At that time this was the most lavish that had been published hitherto. It was designed to accompany Quaritch's unillustrated 1887 Catalogue of Bookbindings, and continues to serve as an indispensable reference work. Additionally, there are 9 color lithographs of Medieval MSS. Our copy is distinguished not only by the fine binding on it, but that most of the bindings reproduced are faintly priced in pencil on the blank leaf opposite. Many Grolier, and Grolieresque bindings are reproduced in gold and color, as well as cameos, French, English, Italian, German, and Scottish bindings (mostly gold-tooled), English silver embroidery, and much more. The design of our binding was clearly inspired by a Grolier binding depicted on Plate [23] in the present catalogue, namely on Serlio's "Antiquita di Roma" (Venice, 1540), now lost for more than a century according to Austin, No. 489. Although the Grolier binding in question was described by Quaritch as "Italian," this catalogue contains the only known illustration of it -- and many other important bindings, including several blatant forgeries.

¶ PROVENANCE: "W.D.E." / "11-3-26" (inscription in pencil on final blank leaf). -- From the notable rare book collection of Alex M. Hudnut (with his blue leather armorial bookplate on first blank). Hudnut was a noted collector of bindings, first editions, Doves, Essex and Kelmscott Press books, Elzevir Press books, Americana, New England Primers, (cf. Book Collectors and Their Hobbies: Comprising Over Nineteen Hundred Names, 1913, passim). His library sold at American Art Association in 1926. We have seen the name on his bookplate wrongly transcribed as "Alex M.H. Udnut." In fact, Hudnut was a New York stockbroker, a formidable collector of Staffordshire China, and a painter of some distinction.

American Text Book for Letters, with a diagram of the capi[tal script alp]habet, with copious remarks on the various letters now in use, with the most correct method for producing them with the pen, brush, chisel or graver

Boston : The Author , 1842
(click for more details about American Text Book for Letters, with a diagram of the capi[tal script alp]habet, with copious remarks on the various letters now in use, with the most correct method for producing them with the pen, brush, chisel or graver)
View all from this seller>