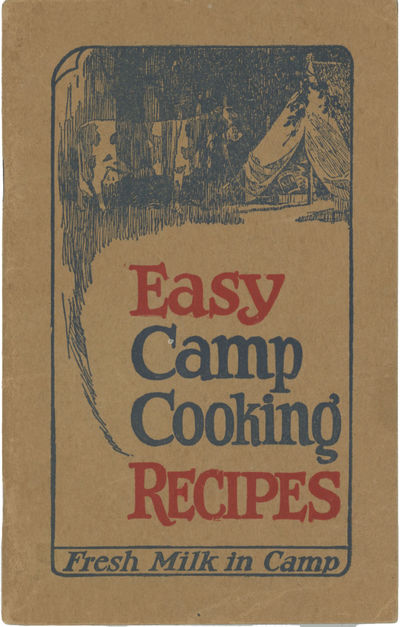 by Merrell-Soule Company
Syracuse, New York: Merrell-Soule Company, 1927. 12mo: 54, [2] p. Printed on yellow stock and bound with staples in illustrated brown paper wrappers (3" x 5"). A previous owner's name has been inked out on the first leaf; else an excellent copy. OCLC locates only one holding, at Virginia Tech.

A recipe book for the then new and growing pastime of camping. All of these recipes make use of Klim dehydrated whole-milk powder. To make it more attractive to male consumers, the company chose seven famous adventurers to provide the recipes: Morris Ackerman, Charles S. Kirstead, James Tandy Ellis, W.H.H. Chamberlin, Harry C. Phibbs, George L. Catton, and Major Townsend Whelen. Includes a brief biography of each contributor.

Klim was developed as a dehydrated whole-milk powder for use in the tropics, where ordinary milk tended to spoil quickly. It soon became a staple of scientific explorers, geologists, soldiers, and other jungle travelers who needed a lightweight dry ration that would keep for several days in high heat and humidity, even when decanted from its container. Klim was a product of the Merrell-Soule Company of Syracuse, New York which in 1907 had improved the spray-drying method patented by Robert Stauf in 1901 by starting with condensed milk instead of regular milk. In 1927 Borden acquired Merrell-Soule gaining the Klim brand and None Such Mincemeat, both already popular worldwide. (Inventory #: 74720)
$125.00 add to cart or Buy Direct from Johnson
Share this item