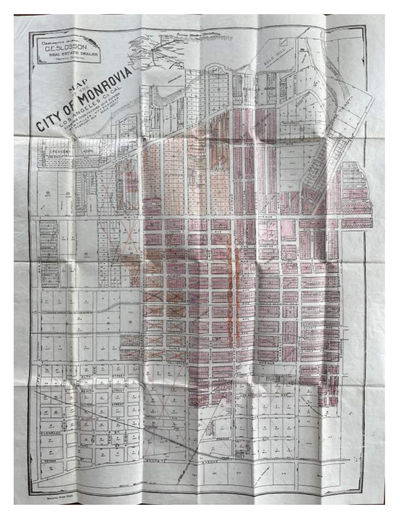 by Miller, H.C., City Engineer
Monrovia, California: C.E. Slosson, Real Estate Dealer, 1908. Large folding pocket map (19" x 24"), with many of the central blocks colored in with red or orange pencil, others with an "X" in orange pencil. Light toning, with minor wear at some of the folds; else very good. OCLC locates no holdings.

Scarce real estate plat map issued by Charles Eugene Slosson as development in Monrovia soared at the dawn of the 20th century. With the arrival of the Pacific Electric "red cars" in 1903, Monrovia emerged as a popular suburb of Los Angeles, located in the foothills of the San Gabriel Mountains (identified as the Sierra Madre Mountains on the inset regional map). The city's boundaries as depicted on this land promotion map stretched out to Fifth Avenue on the West, Shamrock Avenue to the East, south of Santa Fe Avenue (now Duarte Road) on the South, with the foothills to the North. Huntington Drive, one of Monrovia's present-day thoroughfares, appears as Fallingleaf Avenue.

Slosson (1860-1917), a Monrovia pioneer, was one of the original directors of the San Gabriel River Rock Company, later called the Pacific Rock & Gravel Company, and also helped form the Monrovia Steam Laundry Company. He is responsible for creating the Oak Park Tract, located north of Wildrose Avenue and east of Shamrock Avenue. (Inventory #: 74716)
$350.00 add to cart or Buy Direct from Johnson
Share this item