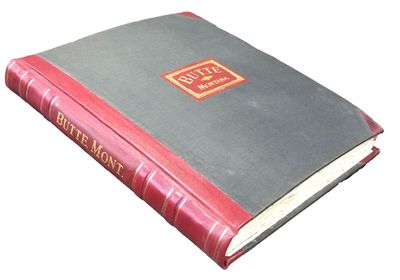 by [Montana]
New York: The Sanborn Map Company, 1916. First edition, with Addenda to September 1942 and Additional Index to September 1953 (a total of eight addenda or index sheets are pasted to the preliminary leaves, with the earliest visible example dated June 1931). A working copy, with numerous pasted and taped on lays and other markings on each map showing property usage, new developments, updated zoning, etc. in Butte and outlying areas.

Produced between 1867 and 1977, the Sanborn maps depict the commercial, industrial, and residential sections of some twelve thousand cities and towns in the United States, Canada, and Mexico. The maps were designed to assist fire insurance agents in determining the degree of hazard associated with a particular property and therefore show the size, shape, and construction of dwellings, commercial buildings, and factories. They also indicate widths and names of streets, property boundaries, building use, and house and block numbers, as well as the locations of water mains and other utilities. Sanborn maps are an unrivaled source of information about the structure and use of buildings in American cities.

Located in southwestern Montana, Butte was established as a mining camp in the 1860s. When large deposits of copper were discovered during silver mining operations, Butte became one of the most productive mining regions in the United States, and the source of nearly one third of the entire world's copper in the early 20th century, led by the Anaconda Copper Mining Company. Notably, these maps record the many mines operated by Anaconda throughout the city, with names such as the Moonlight, Colorado, West Gagnon, West Stewart, Belmont, Pennsylvania, etc.

Anaconda had a virtual monopoly over mining in and around Butte and retained that position until 1977 when it was sold to Atlantic Richfield Company (ARCO). In the 1950s, the declining grade of ore and competition from other mines led Anaconda to switch its focus from the costly and dangerous practice of underground mining to open pit mining. These maps do not show Butte's greatest eyesore, the Berkeley Pit, which opened in 1955. The open pit mine is more than one mile long, a half mile wide, and over 1,780 feet deep, 1,000 feet of which are filled with acidic water with high concentrations of heavy metals and toxic chemicals. It was closed to mining on Earth Day in 1982, and is now a toxic waste tourist attraction.

Map 36 renders one of Butte's lost treasures: the Columbia Gardens Pleasure Resort. It shows the site of its wooden rollercoaster, dance hall, ball grounds, and arcade, which was the location of community dances and performances by local bands. Purchased by the Copper King, William Andrews Clark, in 1900, Columbia Gardens was an oasis in the gritty city of Butte. After Clark passed away in 1928, it became the property of Anaconda but closed in 1973 when the mining company decided to expand its pit operations, which ultimately swallowed up the former park site.

Elephant folio (23" x 25 ½"): title page, [2], 121 full-page color maps, including the index map. The original one-quarter red calf over black cloth binding has been expertly resewn and rebacked, with the gilt-stamped title strip from the original spine laid down and new cream paper pastedowns. Some general soiling to the contents, with a bit of wear along the extremities of the linen-backed leaves, moreso to the preliminary and concluding pages. Very mild evidence of moisture along the edges of the contents and boards. A handful of the leather tabs have perished, with most exhibiting signs of use. Three of the four corners are showing a bit.

A veritable copper mine of information on the development and growth of "The Richest Hill on Earth", still serviceable more than a century later. OCLC locates only one holding, at the Montana Historical Society. (Inventory #: 74722)
$5,500.00 add to cart or Buy Direct from Johnson
Share this item