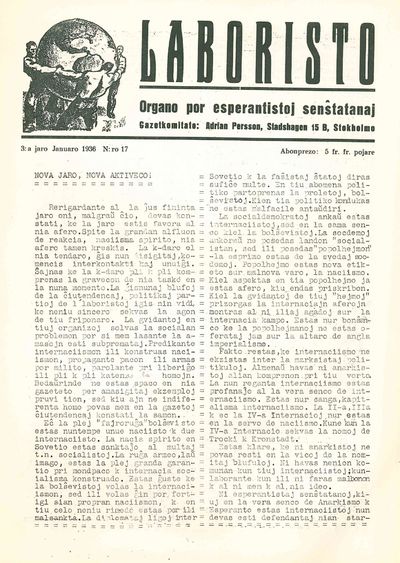 Stokholmo (Stockholm): 1936-1937. Quartos (31 × 22 cm). Original printed self-wrappers; 4-8 pp. per issue. Light wear and minor chipping along top edge of issue no. 22, tear to last page of no. 27; else very good. 13 issues of the scarce Esperanto-language newsletter edited by Adrian Persson, dating to the time of the Spanish Civil War and largely devoted to war coverage. During this period, Esperanto was often used in newspapers and on the radio to keep International Brigades informed about the proceedings of the war. Esperanto was also widely spoken among Anarchists and Catalan nationalists.

These issues contain reports from anarchist Esperanto groups around Europe, letters, updates on the war in Spain, and short essays on topics such as capitalism, Jewish or Arab nationalists, asylum in the Netherlands for political refugees, Mussolini, and the role of Esperanto in the Spanish Republic.