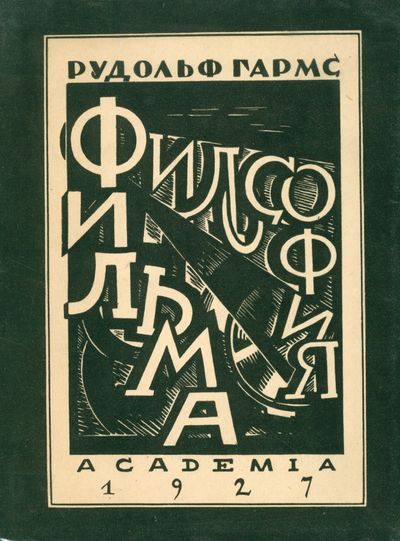 by Garms (Harms), Rudolf with S. S. Mokul'skii, translator
Leningrad: "Academia", 1927. Octavo (18 × 14 cm). Original pictorial wrappers; 187, [5] pp. Partially uncut. Book store stamp to inside of rear wrapper. Very good. First Russian translation of one of the earliest works on the philosophy of cinema by the writer, journalist, and film critic Rudolf Harms (1901-1984). The introduction to this volume, by the philologist and cinema critic Stepan Mokul'skii, characterizes this work as one of the first to treat film as an academic topic, bringing this popular medium into the academic sphere. First published in 1926, the book was one of two titles written by Harms on the subject of film. His later works were historical biographies of figures such as Robert Koch, Paracelsus and Robespierre. Wrapper by the graphic artist Veniamin P. Belkin (1884-1951). Belkin studied art in turn of the century Moscow and Paris later taking part in exhibitions of Mir Iskusstva 1912-1916. During this time he also created illustrations for journals such as Apollon and Satirikon. Later a member of OZh (Obshchina khudozhnikov), a Leningrad art group which continued the traditions of Mir Iskusstva into the Soviet period.