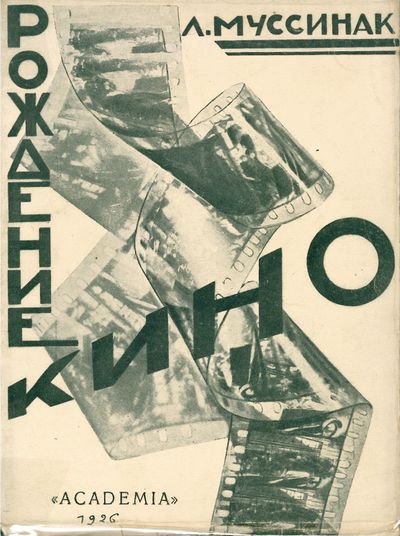 by Mussinak (Moussinac), Léon with S[tepan] S. Mokul'skii and T. I. Sorokin, translators
Leningrad: "Academia", 1926. Octavo (18 × 13.5 cm). Original pictorial wrappers; 195, [5] pp. Illustrations. Partially uncut. Small chip to lower spine extremity. Still about very good. First Russian translation of Moussinac's classic text on the history and theory of American, French, German, and Swedish cinema, originally published as "Naissance du cinema" in 1925. A member of the French communist party starting in 1923, Moussinac was especially active in promoting Soviet cinema in France, highlighting the work of directors such as Dziga Vertov and Sergei Eisenstein. In 1927 Moussinac visited the Soviet Union and in 1928 he published a book dedicated exclusively to Soviet cinema. The introduction to this volume, by the philologist and cinema critic Stepan Mokul'skii, compares this theoretical work to that of Béla Balász, another European Communist film critic, for approaching film from an aesthetic and a sociological perspective. Constructivist-inspired wrapper design by the artist, set designer and theater director Nikolai Akimov (1901-1968). Akimov studied at VKhUTEMAS 1922-1926, then a center of artistic experimentation. At VKhUTEMAS he became close with the avant-garde theater director Nikolai Evreinov, who introduced Akimov to the literary and theater world of Leningrad, including the editor of "Academia", a top publisher for whom he designed numerous book covers and illustrations. A volume dedicated to Akimov's theater design was published by "Academia" in 1927. In the 1930s he worked primarily as a theater director at the St. Petersburg Comedy Theater. This text was part of a theory and history of cinema series (Teoria i istoria kino). With 27 illustrations in the text. Publisher catalog to last pages.