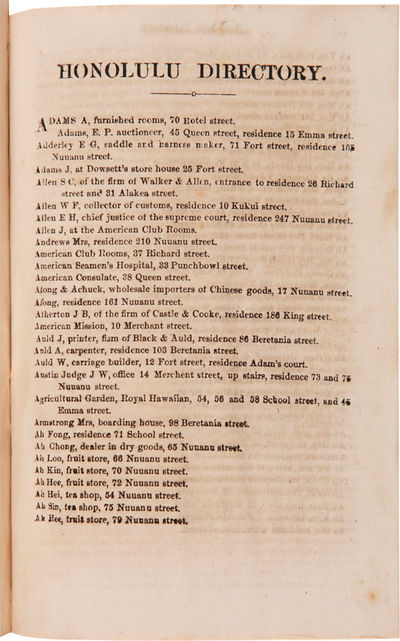 by [Hawaii Directory]: Bennett, C. C.
Honolulu: Printed by C.C. Bennett, 1869 [i.e.1871].. [2],80,[22],[2]pp., including bound-in index leaf from the first edition. Lacks the advertisement leaves. Pebbled purple cloth, front board stamped in gilt. Spine sunned, boards lightly stained. Text lightly tanned, scattered light foxing, index leaves trimmed quite close at head, without touching text, lacking advertisement leaves. Inscription of the Library of the Hawaiian Board on front pastedown and their gilt initials on front board. A very good copy. The second, revised edition of the first Honolulu directory, printed personally by the author at his book and stationery store on Fort Street. Compared to the first edition of 1869, this 1871 edition contains an additional three pages of text which extend the historical sketch to the latter date, and the directory entries are printed in a single column instead of double, along with new advertisements (lacking in this copy) and other minor adjustments. The majority of this work is taken up by a detailed history of the islands, beginning with "Discovery by Gaetano and Mendana" and featuring a "Visit by Cook" (as opposed to the first edition, which begins with "Discovery by Cook"). The following sketch covers the reign of Kamehameha I, the arrival of the first Christian missionaries, and details of various political and diplomatic incidents including the arrival of Catholicism, LaPlace affair, the provisional cession of 1843, a brief paragraph referencing the California Gold Rush, and more. Along with historical details, the author of the history (who Forbes identifies as journalist Henry Sheldon) provides a variety of other pieces of information including on the Bible's translation in Hawaiian, the entirety of the 1852 constitution, a considerably detailed passage on Hawaiian manners and customs, and a dissection of the Islands' declining population issue. At least one contemporary reader was unimpressed by Bennett's improvements, however - H.M. Whitney reviewed the second edition in his weekly PACIFIC COMMERCIAL ADVERTISER, declaring it "the worst specimen of printing in book form that has ever been given to the Honolulu public."

The directory proper begins on page eighty- one and runs for the next twenty unnumbered pages. Residents and businesses are listed by name, usually along with a profession and street address. At the end of the directory is an additional list of "Traders and Planters on the Other Islands." In this copy, an index leaf from the first edition (the second page of which is numbered 88) is bound in at the rear; interestingly, despite the changes between editions, the page numbers listed remain accurate. Both editions of this directory are quite scarce, and this second in fact much more so. While Rare Book Hub locates four copies of the 1869 edition at auction in the past twenty years, not copy of this 1871 edition is noted since a copy at the auction of the Henry C. Carter collection at Anderson Galleries in 1908. OCLC locates only four copies, at the Library of Congress, University of Hawaii at Manoa, American Antiquarian Society, and Harvard. Forbes adds the Hawaiian Historical Society, Hawaiian Mission Children's Society Library, and Hawaii State Library. An uncommon and important early Hawaiian directory. FORBES 2890. OCLC 1091236492, 71531611, 191271313. (Inventory #: WRCAM57593)
$6,500.00 add to cart or Buy Direct from
William Reese Co. - Americana
Share this item