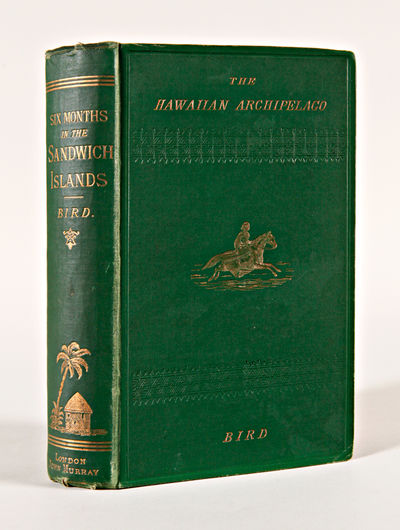 by Bird, Isabella L.
London: John Murray, 1875.. viii,[4],473,[2]pp., including two in-text illustrations, errata leaf, and two pages of printer's advertisements, plus frontispiece, two folding maps, and seven engraved plates. Half title. Original gilt pictorial green cloth. Light shelf wear, hinges cracked but strong. Scattered foxing. Very good. "One of the classic (and most often quoted) books on the Hawaiian Islands, written by a Victorian lady traveler in the form of 31 letters to her sister at home" - Forbes. Isabella Bird travelled enthusiastically throughout the islands in the first half of 1873, visiting Kilauea, climbing Mauna Loa and Mauna Kea, and visiting with King Lunalilo. She also provides the classic account of Waimanu Valley - a remote location which few Western travellers had visited and described before her. Bird's narrative was incredibly popular, and went through more than twelve editions in the first thirty years after its initial publication. This first edition is the only one to feature the excellent two-tone folding map of the Haleakala crater, adapted from W.D. Alexander's map of 1869.

Bird was a famous British explorer, naturalist, and traveller, and became the first woman elected Fellow of the Royal Geographical Society. Her first voyage was to America, which became the subject of her first book in 1856. She later visited Australia, then Hawaii, and later hiked eight hundred miles through the Rocky Mountains and toured China, Korea, Vietnam, Japan, Singapore, and other East Asian locales. After her husband's death in 1886, Bird became a missionary and travelled to India and the Middle East, working with Fanny Jane Butler to establish the John Bishop Memorial Hospital.

"The first edition of a Hawaii travel literature classic" - Forbes. A nice copy of this popular account of Hawaii written by a significant woman traveller, naturalist, and author. FORBES 3070. (Inventory #: WRCAM57572)
$1,250.00 add to cart or Buy Direct from
William Reese Co. - Americana
Share this item