A Souvenir from the Far North 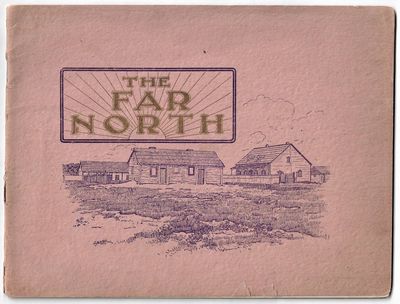 by Mathers, C.W.
Edmonton, Alberta: C.W. Mathers, 1901. First Edition. Softcover. Very good. 6" x 9", oblong, in illustrated stapled wrappers. 23 pp, including title page, a one-page Introduction and 20 half-tone photographic plates. Minor chipping and creasing to wrappers, ink stamp of Ernest Brown Photographers (Edmonton) on text page; very good. Rare first edition of this interesting view book, which contains some of the first professional photographs of the Inuit and Athabascan Indians of northwestern Canada. Edmonton photographer Charles Wesley Mathers (1868-1950) captired the images during a 2000-mile journey with a Hudson's Bay Company trader from Edmonton to the mouth of the MacKenzie River, ultimately reaching Fort MacPherson -- 275 miles inside the Arctic Circle. Scenes include Hudson's Bay Company boats preparing to portage at the Grand Rapids of the Athabasca River, men portaging a boat on the Slave River, a transport team loaded with furs at Fort Smith, Skin Lodges of the Dog Rib and Yellow Knife at Fort Resolution (Great Slave Lake), Fort Simpson, the crew of a Hudson's Bay Co. steamer loading a moose on board on the banks of the Mackenzie River, Fort McPherson, and shots of inuit men, women, and children posing for the camera, kayaking, and engaging in trade with the visitors. A second edition--containing eight more images but lacking the introductory text--was published in 1902. We locate no copies of this 1901 edition in OCLC. (Inventory #: 22292)
$250.00 add to cart or Buy Direct from Walkabout Books
Share this item

Yosemite Trails. Camp and Pack-Train in the Yosemite Region of the Sierra Nevada

Boston and New York : Houghton Mifflin , 1911
(click for more details about Yosemite Trails. Camp and Pack-Train in the Yosemite Region of the Sierra Nevada)
View all from this seller>