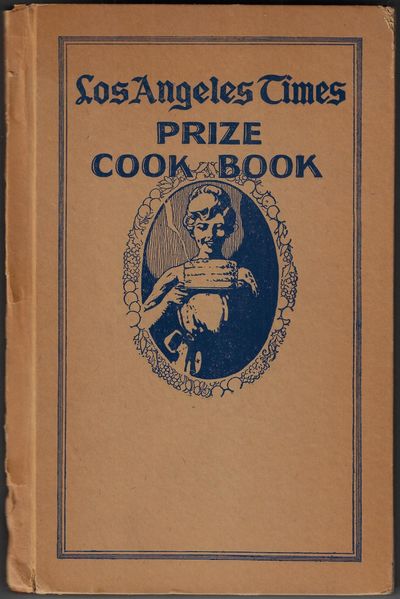 by Wyman, A.L. (Editor)
Los Angeles: Times-Mirror Printing and Binding House, 1923. First Edition. Hardcover. Very good. 6 x 9 inches, 340 pp, in original paper-covered boards. Some chipping and small losses to paper covering spine, all else very good. Original unused order form for the cookbook (which cost 75 cents) laid in. The genesis of this interesting and uncommon California cookbook is explained in a brief introduction: "The fame of Southern California for its varied and distinctive cooking suggested to the Los Angeles Times the idea of gathering together all of the best of these local recipes and publishing them in the form of a practical cook book. As the cost of assembling, testing, and compiling all this material would make the selling price of such a volume almost prohibited, it was decided to invite the cooperation of local cooks and housewives, making the undertaking a sort of partnership on the part of The Times and its readers....A contest was conducted and prizes were awarded in all the main branches of cooking, together with special awards for the best Spanish and Mexican dishes. The idea met with instant response and over seven thousand people took part in the friendly competition. All recipes which promised merit were tested in the laboratory-kitchen of Chef A.L. Wyman. Out of this vast mass of contributions were selected the remarkable recipes which make up the TImes Prize Cook Book....Attention is called to the fact that many of the Spanish and Mexican recipes have never before been published. They have been generously contributed by descendants of some of the oldest families in Southern California." Each recipe is accompanied by the name and hometown of its contributor. (Inventory #: 22277)
$200.00 add to cart or Buy Direct from Walkabout Books
Share this item

Yosemite Trails. Camp and Pack-Train in the Yosemite Region of the Sierra Nevada

Boston and New York : Houghton Mifflin , 1911
(click for more details about Yosemite Trails. Camp and Pack-Train in the Yosemite Region of the Sierra Nevada)
View all from this seller>