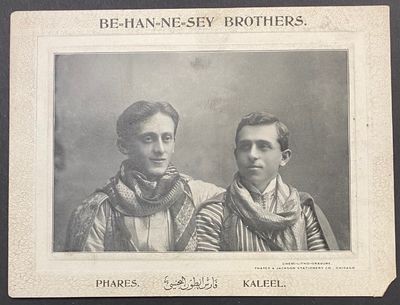 Chicago: Thayer & Jackson Stationery Co, 1900. Photograph. Chemi-litho-gravure portrait of the brothers in Syrian dress, 7.25x5.5 inch card with 3.75x5.5 inch image; chip at lower right corner. Phares's full name is printed in Arabic at the bottom. The Behannessey brothers, born in Damascus, settled in Galesburg, Illinois and were active lecturers in the late 1890s and early 1900s, introducing Syrian culture to American audiences. Several years later, Phares, who had moved to Los Angeles, was one of the prominent Arab-Americans who supported George Shishim in his landmark lawsuit which led to the decision that Arabs were Caucasians and therefore eligible for US citizenship. (Inventory #: 285051)
$95.00 add to cart or Buy Direct from Bolerium Books
Share this item