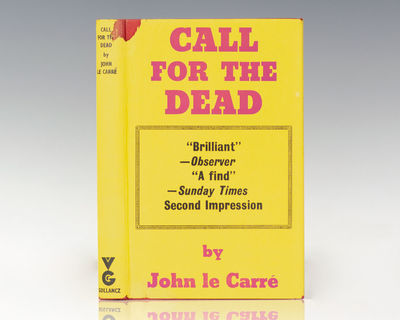 by le Carre, John
London: Victor Gollancz, 1961. First edition of the author's first book, which introduced the world to the recurring protagonist, George Smiley. Octavo, original red cloth. Near fine in a very good second printing dust jacket with a chip to the crown. A sharp example. Call for The Dead introduces George Smiley, probably the greatest figure in all of spy fiction. The New York Times praised the novel as "[a] subtle and acute story of counter-espionage marked by restraint, indirection, and intelligence." The book was adapted into a film entitled The Deadly Affair directed by Sidney Lumet starring James Mason as Smiley. The film received five BAFTA Awards nominations, including Best British Film and Best British Actor. (Inventory #: 136002)
$2,750.00 add to cart or Buy Direct from
Raptis Rare Books
Share this item