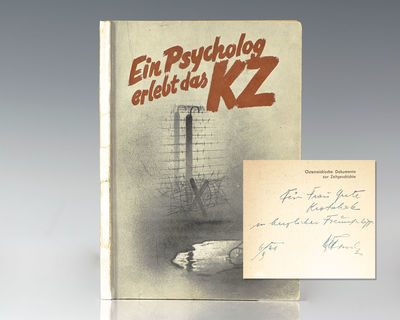 by Frankl, Viktor E
Boston: Verlag Jugend und Volk, 1946. True first edition of Frankl's classic work, which was later titled Man's Search For Meaning. Octavo, original wrappers. Association copy, inscribed by the author in the year of publication on the half-title page, "Fur Frau Grete Krotschak in herzlicher Freundschaft V. E. Frankl 6/9/46." Which translates, "For Ms. Grete Krotschak in cordial friendship V. E. Frankl 6/9/46." The recipient, Grete Krotschak served as the maid of honor at Frankl's wedding with Eleonore Elly Katharina Schwindt. (Frankl: Gesammelte Werke, Bd. 1, 2005, S. 159). Frankl was freed from Turkheim in April 1945, with this example signed a little over one year later. In very good condition, spine with light restoration. We have never seen another signed and inscribed true first edition of this work. Psychiatrist Viktor Frankl's memoir has riveted generations of readers with its descriptions of life in Nazi death camps and its lessons for spiritual survival. Between 1942 and 1945 Frankl labored in four different camps, including Auschwitz, while his parents, brother, and pregnant wife perished. Based on his own experience and the experiences of others he treated later in his practice, Frankl argues that we cannot avoid suffering but we can choose how to cope with it, find meaning in it, and move forward with renewed purpose. Frankl's theory-known as logotherapy, from the Greek word logos ("meaning")-holds that our primary drive in life is not pleasure, as Freud maintained, but the discovery and pursuit of what we personally find meaningful. At the time of Frankl's death, Man's Search for Meaning had sold more than 10 million copies in twenty-four languages. A 1991 reader survey for the Library of Congress that asked readers to name a "book that made a difference in your life" found Man's Search for Meaning among the ten most influential books in America. "An enduring work of survival literature" (New York Times). (Inventory #: 135369)
$38,000.00 add to cart or Buy Direct from
Raptis Rare Books
Share this item