Handwritten Letter to a friend in Washington, Regarding Mining and Politics in Idaho, 1895 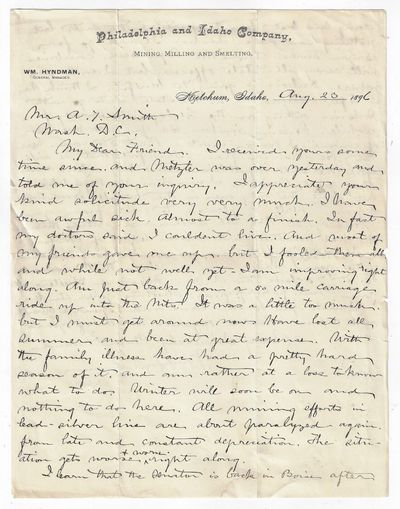 by Hyndman, William
Very good. Autograph letter, signed, from Major William Hyndman (1842-1896) to A.J. [?] Smith, in Washington, DC, dated August 20, 1896. Two pages, on the letterhead of the Philadelphia and Idaho Company of Ketchum, Idaho. Old folding creases, two splits at folds, but overall very good. Hyndman was a Pennsylvania-born graduate of Harvard Law School who served in the Union Army during the Civil War. Around 1880, he moved to Idaho, where he practiced law and became involved in the mining business. In this letter, written just weeks before his death at the age of 54 on October 1, 1896, Hyndman writes that he has been "awful sick" and most thought he would die, but says he is now improving and has just returned from a 50 mile carriage ride into the mountains. He reports that "all mining efforts in lead-silver line are about paralyzed again from late and constant depreciation. The situation gets worse and worse right along." From there, he moves into a discussion of the political situation in Idaho: "I learn the the Senator [George Shoup or Fred Dubois] is back in Boise after doing his best for the party in the east, but nothing can save Idaho. It will go for [William Jennings] Bryan sure. And the Pop-Dem. combined will carry all the state offices....I am a straight Republican but about the only one in the whole Wood River region." He concludes with some news of friends and comments on the wonderful weather and good fishing and hunting in Idaho at present. (Inventory #: 22338)
$45.00 add to cart or Buy Direct from Walkabout Books
Share this item