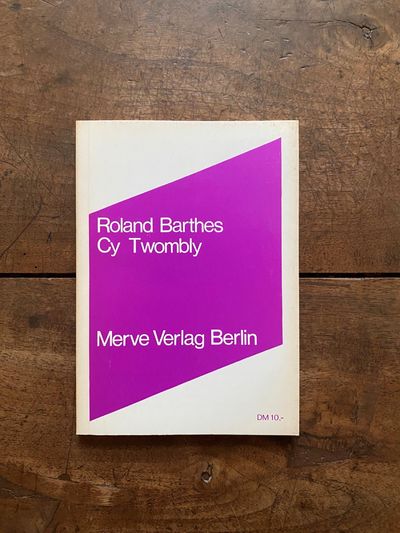 by BARTHES, Roland
Author port. on inside of upper cover and 26 black & white illus. (several double-page). 95 pp. 12mo (169 x 120 mm.), geometric softcover, title on spine. Berlin: Merve Verlag, 1983. First edition, Merve Verlag's scarce translation of Roland Barthes's important writings on Cy Twombly. One of a handful of Merve publications on art history, most of its books were devoted to philosophy and radical political theory. The first essay, "Non multa sed multum," was originally published in Vol. VI of Yvon Lambert's Twombly works on paper catalogue raisonnÃ© which came out in 1979. "Weisheit der Kunst" ["The Wisdom of Art"] was first published in the Whitney Museum of American Art's catalogue Cy Twombly. Paintings and Drawings, 1954-1977 (1979). The translations were done by Walter Seitter. Fine; inoffensive sunning to the spine. WorldCat: Whitney, Getty, and Menil. (Inventory #: 8286)
$95.00 add to cart or Buy Direct from
Jonathan A. Hill, Bookseller
Share this item
Jonathan A. Hill, Bookseller, Inc.
Offered by


(click for more details about The Artists' Books in European View: the Soul of Books or the Third Generation)