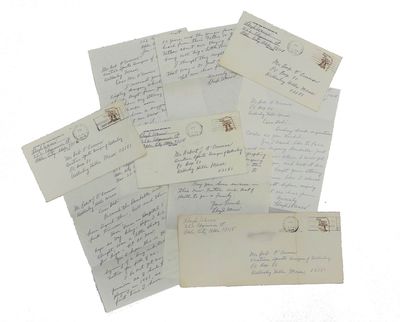 signed
by Waner, Lloyd
January 12, 1978 - March 30, 1978. From Hall of Famer Lloyd Waner to businessman Bob O'Connor. Collection of three ALS in ink (five pages total), with original envelopes and one additional envelope. About fine collection with a bit of toning to envelopes and extremely minor soiling to Jan. 12 letter. Overall, an excellent collection with intriguing content. This collection includes letters written from Lloyd Waner to Bob O'Connor about their autograph-related business deal. In the letters, Waner proposes an idea to sign materials as "Little Poison," his playing nickname, and expresses optimism for his and O'Connor's burgeoning professional relationship. In the last letter, dated March 30, Waner strikes a more personal tone, writing that he'd just been in the hospital ("...was a little shaky a few days - but o.k. now"), and mentioning the lack of remuneration that he'd received in the past for autographing: "I do not get any Baseball pension as I had to quit playing in 1945, so this is the first time I have received anything for all the autographing I do." He also says: "It keeps me busy signing pictures for the kids all over the country, [but] sometimes it gets to be a bore." Lloyd Waner played nearly 20 years in the league, most notably with the Pittsburgh Pirates (1927-1941, 1944-1945), where he shared the outfield with his older brother, Paul Waner. Lloyd and Paul, nicknamed "Little Poison" and "Big Poison" respectively, were both elected to the Hall of Fame, Paul in 1962 and Lloyd in 1967. . Signed. (Inventory #: LWAN001)
$225.00 add to cart or Buy Direct from
B & B Rare Books
Share this item