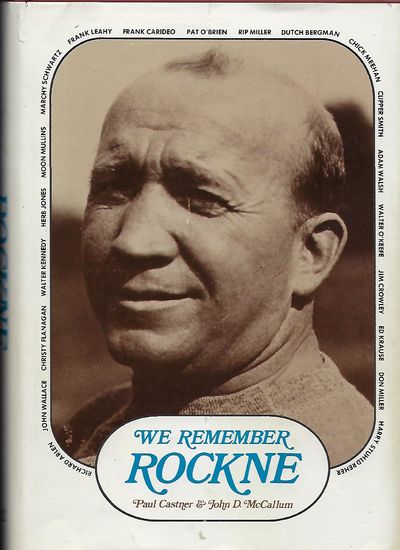 by CASTNER, Paul. [With John D. McCALLUM]
Huntington, In.: Our Sunday Visitor, Inc, 1976. First Edition, second printing. Wonderful signed presentation to an Indiana congressman and later a federal judge, on the front endpaper: "6-11-77. To Judge Bob Grant. Judge, I am pleased to share these wonderful memories of 'Rock' with you. The book is a portrait of a beautiful man and his philosophy. Sincerely, Paul Castner." Castner was an all-American fullback at Norte Dame, who was coached by Rockne in the 20's. Also, with two printed copies of an article about the book in the Dec. 7, 1975 issue of the St. Paul Pioneer Press are laid in. One copy is inscribed by Castner: "To Judge Bob Grant, Paul Castner" With another related newspaper article laid in. An interesting book about Rockne and early football at Notre Dame, with pictures of early football players and related biographies. Photographs of the Four Horsemen and other players and coaches. It is autographed by Castner who was a football player himself, to Judge Grant who resided in South Bend, IN. at the time. Robert Allen Grant [1905-1998] was a United States representative from Indiana and later a United States district In 1957 Grant was nominated by President Eisenhower to a seat on the United States District Court for the Northern District of Indiana vacated by Judge W. Lynn Parkinson. Grant was confirmed by the United States Senate in 1957. He served as Chief Judge from 1961 to 1972 and was also a visiting judge for twelve terms at the United States District Court for the District of Puerto Rico. Grant continued to serve in his senior status until his death in 1998. On September 25, 1992, the divisional courthouse for South Bend was rededicated as the Robert A. Grant Federal Building and U.S. Courthouse. An interesting copy!. 8vo., brown cloth in dust jacket; 239 pages. Illustrated.. Very Good (covers nice & bright; contents clean & tight); few tiny tears d/j. (Inventory #: 57881)
$75.00 add to cart or Buy Direct from Antic Hay Books
Share this item
Antic Hay Books
Offered by

DANCING IN THE WATER

Marion : Linn Litho, Inc. , 1976
(click for more details about DANCING IN THE WATER)
View all from this seller>