Two visits to the Island of Saghalien and the Gulf of Tartary during the summers, 1897-8 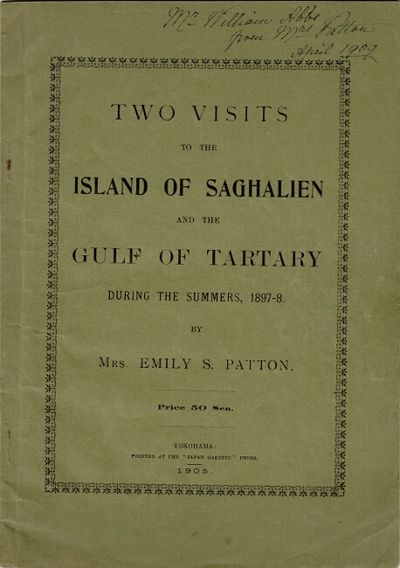 by Patton, Emily S.
Yokohama: printed at the Japan Gazette Press, 1905. 8vo (approx. 9¾" x 7"), pp. [2], 30; inserted leaf at the front with a lithograph view of the port of Saghalien (i.e., Korsakoff) based on a sketch by Patton on the recto, and a full-page map of Saghalien in the Sea of Japan on the recto; original oliver green wrappers printed in black; a near fine copy of a rare account: only 3 in OCLC, the National Diet Library in Tokyo; State Library of New South Wales in Australia, and one at the NYPL. This copy inscribed to "Mr. William Abbs from Mrs. Patton, April 1909." Published just after Japan seized control of the territory from Russia towards the end of the Russo-Japanese War in 1905, but Patton writes about visits made in 1897-1898. She was likely one of the few in Japan with first hand knowledge of the island at the time. Saghalien [Sakhalin], or Karafuto in Japanese, was well known as a Russian penal colony. It is now Russian territory and is Russia's largest island. Emily Sophia Patton (1831-1912) was a British-born Australian who lived mostly in Yokohama from 1889 until her death. She taught music and wrote a couple of other books on Japan including Japanese Types. Sketches with Brush and Pen (1905) in collaboration with the talented local artist Minnie Agnes Schwabe. Her life was filled with tragedy, having lost her husband and two children, and she most of her life savings disappeared with the failure of the Oriental Bank. She subsequently earned a living by writing for various newspapers and journals, including the Sydney and Melbourne papers. See: Robin S. Stevens, "Emily Patton: An Australian Pioneer of Tonic Sol-fa in Japan", in Research Studies in Music Education, Number 14 (2000), pp. 40-49. (Inventory #: 60671)
$2,875.00 add to cart or Buy Direct from
rulon-miller books
Share this item