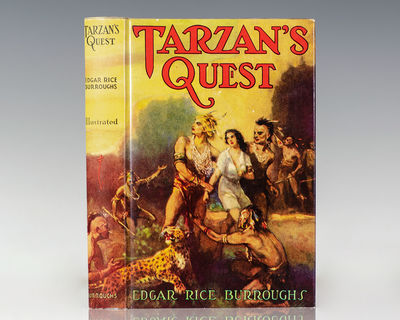 by Burroughs, Edgar Rice
Tarzana: Edgar Rice Burroughs, Inc, 1936. Early printing of the nineteenth book in Burroughs' epic Tarzan series. Octavo, original gray cloth, frontispiece by J. Allen St. John. Near fine in a near fine dust jacket. The noble savage Tarzan first appeared in Burroughs' 1912 story Tarzan of the Apes, published in pulp magazine The All-Story and in book form two years later. An archetypal feral child raised in the African jungle by Mangani great apes, Tarzan spawned innumerable works in literature and film, including 25 sequels and the popular Tarzan movie franchise which lasted from the 1930s to the 1990s with the release of Disney's animated film, Tarzan, released in 1999. (Inventory #: 135019)
$125.00 add to cart or Buy Direct from
Raptis Rare Books
Share this item

Children of the Mist: A Novel.

New York : Holt, Rinehart and Winston , 1972
(click for more details about Robert Frost: Poetry and Prose.)
View all from this seller>