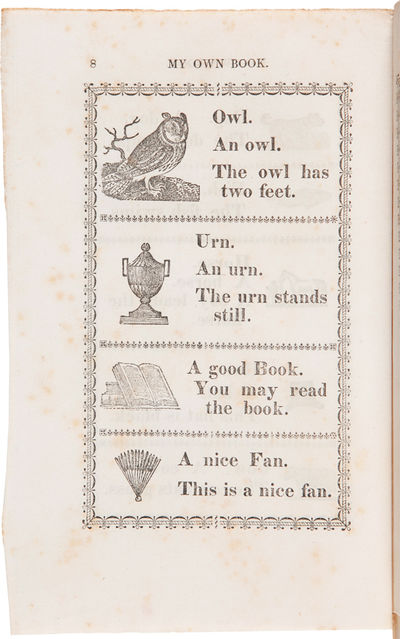 by [Hawaii]
Honolulu: Press of the Am. Mission, 1845.. 60pp., including in-text woodcut illustrations. 12mo. Unbound folded and gathered sheets, as issued. Scattered foxing. Very good plus. Untrimmed and unopened. In a grey cloth slipcase. A very rare and early illustrated textbook printed in Honolulu. This copy, still unbound, untrimmed, and unopened, was given to the Hawaiian Mission Children's Society (HMCS) in 1936 by Charlotte Van Cleve Hall, granddaughter of the missionary and printer Edwin Oscar Hall.

"The text of this reader begins with simple alphabets, then progresses to names of objects with simple definitions and illustrative woodcuts. By page 16 there are paragraphs on a variety of subjects, again illustrated. On pages 37-40 [i.e. 38-40] there is the often-told tale of George Washington and the cherry tree. An article on the 'Bethel Flag' on page 47 is illustrated with a woodcut of a three-masted ship, and immediately following are illustrated articles on various chapels and churches for seamen, including that at New Bedford, and the famous Floating Church at New York" - Forbes.

Edwin Oscar Hall came to Hawaii as a missionary in 1832 and spent most of his life on the Islands, although in 1839 he also spent a year in Oregon with a printing press in order to facilitate printing in the indigenous languages of the Pacific Northwest. During his time in Hawaii, he was Minister of Finance under Kamehameha III and Minister of the Interior under William Lunalilo. He was also a founding member of the HMCS. A gift inscription on the preliminary blank states that this copy of MY FIRST BOOK was gifted to the HMCS by Hall's granddaughter Charlotte in 1936, a lifelong Honolulu resident and officer in the Hawaiian chapter of the Daughters of the American Revolution. OCLC locates this rare pamphlet at only four institutions: The New York Public Library, Library of Congress, the Bishop Museum in Honolulu, and the Alexander Turnbull Library in New Zealand. Forbes locates further copies only on the Islands, in the Hawaiian State Archives, Hawaiian Historical Society, and HMCS. This is the first copy we have handled. FORBES 1560. FORBES, TREASURES OF HAWAIIAN HISTORY 52. (Inventory #: WRCAM57609)
$5,000.00 add to cart or Buy Direct from
William Reese Co. - Americana
Share this item