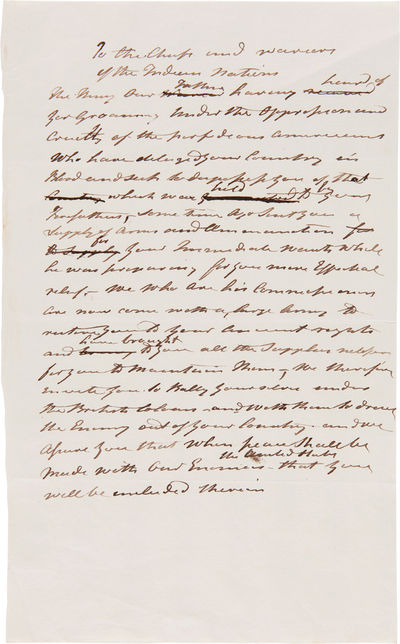 by [Codrington, Edward]: [War of 1812]
[Aboard the HMS Tonnant, off Apalachicola, Fl, ca. December 5, 1814].. [1]p. of a folded sheet, [4]pp. on a folded folio sheet. Numerous cross-outs and emendations. Old folds. Near fine. A fascinating and forceful pair of draft addresses by British fleet second-in-command Rear Admiral Edward Codrington, directed chiefly to the "Red Stick" Creek faction to persuade them to ally with the British against the Americans in the War of 1812. Until the late summer of 1814 the Red Stick Creeks had been fighting a civil war against the Lower Creeks, who were allied with the United States as well as the Choctaw and Cherokee Nations (traditional enemies of the Creeks). The British and Spanish offered support to the Red Stick Creeks during the conflict. The Creek War was largely settled by the Treaty of Fort Jackson (August 1814), in which Andrew Jackson compelled the Creek on both sides of the conflict to cede twenty- one million acres of land to the United States in what is now southern Georgia and Alabama.

Hoping to exploit lingering resentment against the Americans, Codrington here drafts two appeals to the "Creek and other Indian Nations." He begins one by noting that "The great King George our common father has long wished to relieve the sufferings of his warlike Indian Children and to assist them in regaining their rights & possessions from the rebellious and perfidious Americans." He continues, "The same principle of Justice which led our father to wage a war of twenty years in favour of the oppressed nations of Europe animates him in support of his Indian children." Codrington then reminds them of how the British have kept their earlier promises: "We promised you by our letter of the 29th June 1814 that great fleets and armies were coming to attack our foes, & you will have heard of our having taken their capital city of Wash. & created terror in the heart of their country." Codrington continues by asserting that "by the efforts of [the King's] warriors he hopes to obtain for them [the Red Stick Creeks] the restoration of those lands of which the treacherous people of the bad spirit United States have basely robbed them." And so, "Come forth then you brave chiefs & warriors as one family, & join the British Standard....If you want covering to protect your wives & children against the winter's cold, come to us....If you want arms & ammunition to defend yourselves against your oppressors come to us....And what do we ask in return...? Nothing save that you should assist us manfully in regaining your lost lands, the lands of your forefathers, from our common Enemies the people of the United States...."

These drafts exhibit numerous cross-outs and emendations, showing the clarifications and refinements Codrington made to his texts. While there is no surviving reply, Codrington's appeal seems to have failed to motivate the Creek or any other Native American nation. The Creeks did not accept the British offer and did not participate in the Battle of New Orleans, although members of the Choctaw Nation did fight alongside other New Orleans troops under Jackson. Coincident to Codrington's drafting of these addresses, American and British negotiators at Ghent were finalizing the terms of the peace treaty that would end the War of 1812.

Manuscripts by Codrington are uncommon in the trade and at auction. An important British appeal for Native American support in the waning days of the War of 1812. (Inventory #: WRCAM57582)
$11,500.00 add to cart or Buy Direct from
William Reese Co. - Americana
Share this item